Urban jungle or urban labyrinth? To an NYC taxi, the city is both.

And now, you can watch a taxi do its maze-tracing, money-making thing for a full 24 hours, totally uncensored.

NYC Taxis: A Day In The Life is a "civic technology project" that analyzes how taxis move around the city. On the webpage, visitors are randomly assigned a taxi and then watch, in fast-forward, a day in that taxi's life, from first passenger to final drop-off.

A map traces the route, and tickers keep track of the passengers transported and income accrued. Watching is addictive, to say the least. 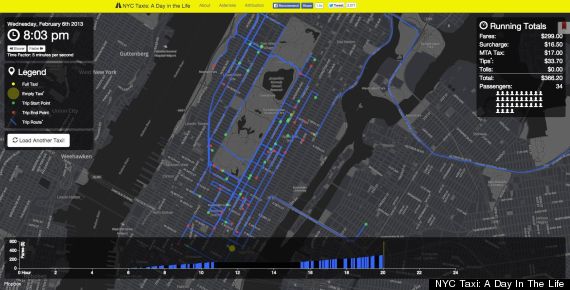 The taxi we tracked, for example, started the morning at JFK, then zipped to the Upper West Side for a quick heap of cash. It spent most of the day in Lower Manhattan, weaving the same route -- from Tribeca to Chelsea -- a few times around noon (an event, perhaps?).

After five o'clock, trips to the Upper East Side became frequent -- probably people riding home from work. And at 8:48 p.m., our taxi scored its second most lucrative trip of the day, from 66th Street all the way down to the Financial District.

Not bad for a New York day's work.