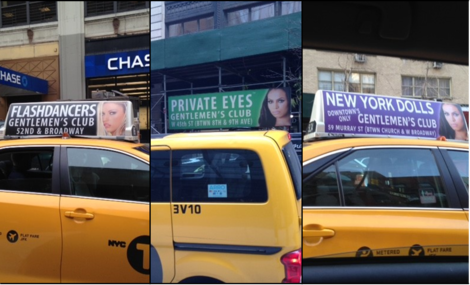 I get angry about things, then go on and work.
― Toni Morrison

Gloria Steinem often reminds us that the strongest predictor of whether a country will be violent within its borders, or in its use of military force, is not poverty or access to natural resources, not religion or gradations of democracy - it is violence against its female citizens. One dominant group's lingering thirst to control the "second sex" remains today, more than ever, a threat to the intricate fabric of equality.

Women's rights are always at risk of erosion, from reproductive health to freedom from discrimination. Efforts to protect our inalienable rights often seem overwhelming, which is why small, targeted fights are strategically essential. Today, the Coalition Against Trafficking in Women's modest but significant stand is calling on our city governments to stop promoting the inaccurately-named "gentlemen's clubs." In particular, New York City must end advertising strip clubs on its yellow cabs.

Why, of all urgent issues to tackle, this one?

No industry normalizes violence and discrimination against women more than the sex trade. The sex trade is what journalism professor Robert Jensen and sociologist Matt Ezell call the perfect storm of inequality, a trifecta of male domination, white supremacy, and a predatory market of paid sexual violence. Our cultural acceptance of it frames our vocabulary and the way we treat all women.

While strip clubs are legal in most US jurisdictions, they are part and parcel of the multi-billion dollar global sex trade, which includes prostitution and pornography. Their raison d'être is allowing men to grab women's bodies as entertainment and purchase consent with dollar bills stuffed in thonged groins. The truth is that strip clubs across the country are dens of sex trafficking and exploitation, which New York City should no longer promote with omnipresent ads for Flashdancers, Private Eyes, and New York Dolls on yellow taxis.

Shortly after Autumn Burris turned 18, motorcycle gang members enticed her to dance in a strip club. Three decades later, she heads Survivors for Solutions, an organization she founded to engage sex trade survivors into leadership roles. Autumn describes her early days in stripping: she barely weighed 100 pounds with the tiniest bra size, but her physique was so desirable to customers with tastes for pedophilia that the other young women there were cruelly jealous of the disproportionate attention she received. Autumn's mission today includes helping the public demystify stripping as glamorous, harmless, and empowering. She also highlights the links between strip clubs, trafficking, and organized crime.

"Stripping is pornography on stage and the archetypal launching pad to prostitution," said Autumn, also a member of SPACE International (Survivors of Prostitution-Abuse Calling for Enlightenment). "The more I danced, the more I used drugs to cope with the sexual harassment and violence. I felt dirty and degraded as a way of life; yet it was terribly hard to leave."

Dehumanization is malicious in its intent and impact; it cannot be segregated into siloes. Our outrage over the pervasive dehumanization of the "other," whether of African Americans or the LGBTQ populations, immigrants or the disabled, Muslims or Jews, must extend to all women, regardless of circumstances. The belief that strip club "dancers" do not at some level feel violated every time a stranger puts his hands, penis and any object he fancies on and in her body, is delusional. And if these lairs of hell are so-called workplaces, why aren't sexual harassment and sex discrimination laws applied?

Out of well-justified fear for our country's future, civil liberties and human rights groups are ready at the gates to fight the growing threats to our hard-earned advances, but embracing the sex trade has no place in that struggle, despite the millions George Soros invests in the worldwide push to decriminalize sex buyers and pimps. Indeed, protecting the rights of the prostituted must include offering comprehensive services in lieu of criminalizing them, but impunity for perpetrators can never be justified. Welcoming the sex trade as viable "work" for marginalized women and transwomen, overwhelmingly of color, is both unimaginative and cruel. The sex trade is not an exception to abuse and gender-based violence; it begets commercialized dehumanization.

While the U.S. is light years away from Iceland's ban on strip clubs, the City of New York must at least try to grasp what gender equality truly means and end its promotion of sexual exploitation. New Yorkers would never accept ads marketing "black face" minstrel shows, so why those that degrade women?

As Autumn and other survivors remind us, we will continue to stumble on our thousand-mile march toward justice and dignity for all without grasping that the human rights of women are indivisible.