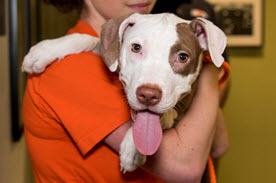 When is a crime truly treated like a crime?

When police consider fighting it a primary responsibility, when criminal laws and sentences match the seriousness of criminal behavior, and when society resoundingly rejects both the crime and the criminal.

In our efforts to stop animal cruelty, we're making great advances toward all of these goals. This week, we're adding another milestone to that list.

Recognizing the public's pivotal role in stopping crime, the ASPCA and the New York City Police Foundation have just announced a collaboration to expand its successful Crime Stoppers program to include animal victims of cruelty. For the first time in New York City, the public will be able to easily and anonymously provide critical information about animal cruelty crimes in the five boroughs. Some of these unsolved crimes may be broadcast from Crime Stoppers vans that roam the city.

At its core, this is not just a partnership between public organizations. It's truly a four-way partnership among the ASPCA, the NYPD, the New York City Police Foundation and - crucially - the people of New York City. 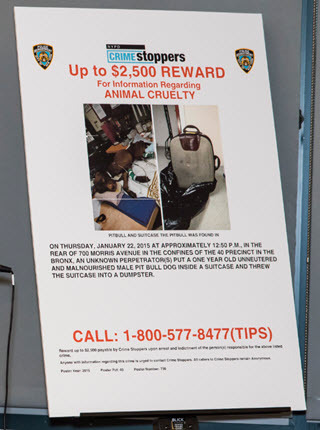 In this partnership, New Yorkers will have the means and motivation to help city animals in crisis, the NYPD will have a valuable new resource to help them close animal cruelty cases, and the ASPCA will be able to help more at-risk animals make the transition from victims and evidence to pets and companions.

But this program relies on the public's participation for it to have the greatest life-saving potential. So I encourage all New Yorkers to be aware and vigilant of animal abuse and neglect in their city.

One animal whose story needs public attention right now is Fraggle, a pit bull mix who, in January, was found by the NYPD zipped inside a suitcase in the South Bronx, critically malnourished and in need of immediate medical attention.

At the ASPCA Animal Hospital, Fraggle's recovery was slow, but successful. His case generated a lot of attention, and thanks to our work with Crime Stoppers, the ASPCA is offering a generous reward for information leading to the arrest and conviction of his abuser.

While Fraggle's abuser is still at large, I'm happy to report Fraggle was adopted in May by a family in Queens.

Our relationship with Crime Stoppers is another example of the huge impact resulting from our comprehensive partnership with the NYPD, which is already producing record-breaking numbers of both animal cruelty arrests and rescued animals across the city. In the first six months of this year, we've already seen a 28 percent increase in arrests and a 115 percent increase in animals treated over the same time period in 2014, which was already a record-breaking year.

Time and again, we've seen that when people are moved to make animal welfare a priority, great things happen for people, pets, and communities. This collaboration makes it clear that animal protection is not just a priority for NYC agencies, but a hallmark of New York City overall.