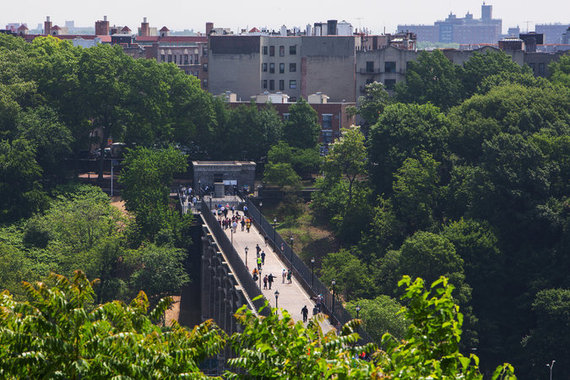 New York may be known for its Fifth Avenue shopping and unique real estate, but also key to its appeal is its remarkable inland parks and green waterfronts. The island of Manhattan, separated from Brooklyn and Queens by the East River and from the Bronx by the Hudson, boasts waterfront parks as centers for both tourists and locals to intermix at a site for cultural propagation.

Opposite of the city's most famed park, Central Park, located along the horizontal center of Manhattan, are those on the riversides of the outer boroughs offering Manhattan skyline views. The Brooklyn Bridge Park, located along the East River in Brooklyn's DUMBO and Brooklyn Heights neighborhoods has become a destination for families hoping to catch a ride on Jane's Carousel and for friends picnicking on a takeout Grimaldi's pizza.

The high volume of visitors the park and its Manhattan views bring to the neighboring areas has encouraged cultural, commercial, and retail development, ultimately contributing to the rising demand for new residential developments to the downtown Brooklyn area. However, one of these new residential buildings, the Pierhouse, has faced scrutiny and a lawsuit over the possibility that the building plans would block views of the Brooklyn Bridge from the public park. While the views, which are one of park's biggest attractions, are protected from height restrictions agreed upon in 2005, the community group fighting to protect the views was unsuccessful in their lawsuit.

Despite the possible drawback of blocked views from residential development, community activists in the Bronx are calling for a waterfront park of their own now that the High Bridge, which connects Manhattan to the Bronx through a pedestrian and biker bridge, has reopened.

As seen with the creation of the Brooklyn Bridge Park, the development of a greenway is hoped to spur traffic, which would encourage commercial and residential development in the neglected and low-income High Bridge area. Land on the Bronx side of the High Bridge is already owned by the Parks Department to the north and the MTA to the south, making the plans to develop the area into a greenway much more feasible. It seems as if all that is needed is funding, which may be found in Mayor Bill de Blasio's proposed budget, which would begin July 1, that allocates $1.27 billion to parks.

While it is uncertain if the creation of a greenway overlooking Manhattan could make the High Bridge area as hot of a destination for families and tourists alike as the Brooklyn Bridge Park currently is, Bronx borough president Ruben Diaz Jr. compares the Bronx's High Bridge to the West Village's Highline, which has a stylish feel as it snakes between luxury residential developments and the new Whitney Museum. However, the High Bridge area, despite its lack of attention and funding in recent years as seen in the 40 years it took for the current park to be reopened, appears to be a source of pride for the Bronx community, only furthering the request for development.

As developing New York City's parks encourages cultural growth and provides increased opportunities for residents in the surrounding areas, the future of its waterfronts is sure to be prosperous.