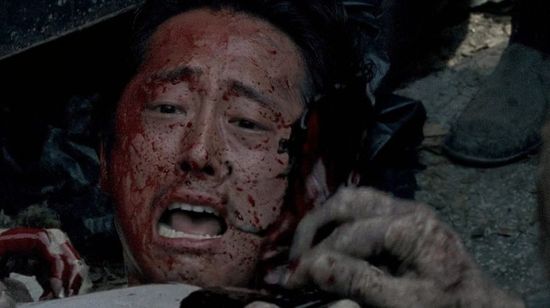 Look at that picture above. From last week's episode of The Walking Dead, this scene involving Steven Yeun's character Glenn has been the talk of the nerdy Internet for about a week. It has likewise captured my attention, but not because of the maybe/maybe not demise of the former pizza delivery boy and zombie apocalypse hero.

Instead, look at those pearly whites! It has been more than a year and a half since the dead started coming back to life and civilization crumbled within the show, but Glenn's teeth are still in pretty great shape. Granted, Glenn and the Rick Grimes Gang have had the fortune of hanging out in Alexandria for a few days at the end of Season 5 and beginning of Season 6, but most of the time these survivors have been on the road, just trying to stay alive.

So how does Glenn do it? How does he manage to survive zombies (and Merle, the Governor, Termites, Wolves, etc) while keeping his chompers in good enough shape that even Walkers take notice? Well, the obvious question is that we suspend our disbelief because no one wants to watch actors sporting mouths full of rotten saws.

Nevertheless, Glenn's teeth got me thinking about how best to keep one's mouth in good shape while on the run. And it's not important because you plan on smiling a lot in an apocalyptic wasteland. No, according to the Mayo Clinic, poor oral health has been linked to other issues, such as heart attacks and dementia.

Which is why I called upon Nicholas Toscano, DDS, New York City's zombie dentist. The celebrity dentist from Manhattan Periodontal Associates has treated many famous teeth. But the 13-year Navy veteran who treated at "The President's Hospital" National Naval Medical Center - and received the National Defense Service Medal and Global War on Terrorism Medal - is a zombie-lover and Walking Dead head.

Toscano has previously answered my questions about the potential power and longevity of a zombie's teeth. But now, I wanted to ask him about Glenn's teeth in TWD, and to expand on his comments to me about a survivor's oral health post-apocalypse. He also delivers a big shocker of a surprise about dentists and Halloween - and how they might be pulling their own little trick on candy-hungry kids.

Let's talk Glenn. He survived the initial apocalypse, so how might he be taking care of his teeth?

Just like in everyday, I recommend he'd brush twice a day, floss once a day. How does he do that when it's not easy to come by toothbrushes and floss? Well, he'll scavenge a lot. On the show, he has hit these pharmacies or stores a lot, so he'd look for toothpaste, floss, mouth rinse. Even though it has an expiration date on it, it is good for five to 10 years beyond that. Glenn, or you, won't be hurting yourself even if it is an old toothpaste or rinse.

What if we can't find that during our scavenging?

Learn from the people in the Middle Ages. Take branches, fray the ends, and go around the teeth to remove the plaque from the teeth. Use olive oil, which is a good product to brush your teeth with. It is a glycerin that helps prevent bacteria from clinging onto the teeth. Use salt and salt water; it kills a lot of bacteria that cause gum disease and cavities. You could brush and rinse with that -- using two tablespoons and an 8-ounce glass of water. Also, hydrogen peroxide, which is something that's easy to find. You can rinse with that or actually brush with it. And not only will that kill bacteria, but it will keep your teeth very white. Baking soda is regularly available, and is another excellent product. As super markets get scavenged, not a lot of people will be grabbing that! The benefit there is you can make slurry in water with that to resemble paste or a mouthwash.

Should Glenn give up on flossing since there isn't a "nature's floss"?

It is kind of hard to find. He could probably find floss in the early days, but you can use sewing thread of an appropriate thickness. Really, any type of thread you find can be used. If you find yourself in a hotel, there's normally a complimentary sewing kit you can grab that may be left over. And honestly, those are also good for stitching up wounds. Stockpile those.

We previously spoke about the scene in Castaway when Tom Hanks yanked out his own tooth due to an abscess. You said that scenario might be necessary in a post-apocalyptic world, but how do you know when to do it?

Well, pain is going to drive that. If your tooth is abscessed to the point it has to come out, the pain will be the driving factor. As most people know, when you have a tooth that needs a root canal or there's a bad abscess, you can hardly function. You need to get it out right away. If you have to do it by yourself, you can follow Tom Hanks' method. He grabbed a rock and filed it down to pry it out. A lot of times when a tooth gets that bad, it gets pretty loose in general. In a zombie apocalypse, tools should still be readily available. So grab some pliers, and if you're going to pull it, just grab and pull it to the outside of your face. It should pull right out. You can take a screwdriver, or something narrow, and actually get it in between two teeth. Push against the tooth that's hurting, and that will get it mobile, then grab it with the pliers, and pull it out.

How do you prevent infection from setting in?

Once you get the tooth out, you're going back to your products to stop the infection. Salt water rinses, hydrogen peroxide; you're trying to detoxify the area and minimize the amount of bacteria there. The immune system is a wonderful thing, and remember, the tooth is the source of infection, so getting it out of the mouth, the immune system will get rid of the residual bacteria. Get the culprit out of the mouth, and the body will eventually heal itself.

Do you recommend clove oil, which is a natural antiseptic and painkiller?

Yes. We actually use it in dentistry. When we take out teeth today, we can get a dry socket. For instance, when removing a wisdom tooth, the blood clot may wash away, which leads to an exposed bone. That's a dry socket, and it's incredibly painful. A lot of the dry socket dressings from a major dental supply company like Henry Schein contains oil of cloves. It is a paste we actually put into the tooth socket to sooth the bone and allow it to heal. Oil of cloves is excellent for something like that. Another good anesthetic is whisky. When kids are teething, instead of doing Anbesol, a lot of doctors recommend taking some whisky to rub on their gums. But definitely not the good stuff.

If Glenn, or any survivor, raids a medical supply company, what should they grab?

Forceps, surgical elevators, and the dry socket paste is all good. And if he sees toothpaste, look for something has fluoride, and an ingredient called triclosan, which kills a lot of bacteria that causes gum disease.

Any foods to stay away from when living in a zombie-ridden world that might be bad for teeth?

Candy and raisins, and things that will stick to your teeth. It's funny, a lot of dentists give out raisins during Halloween. Most people thing it's because it is healthy, but no. In actuality, it sticks to their teeth and creates cavities. It is not really a nice thing that dentists do! But raisins are probably one of the worst things for your teeth because it coats the teeth in sugar. Not good. Stay away from those. Stick to a crunchy vegetable diet; those actually wash away some of the bacteria.