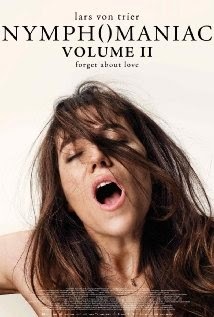 Lars von Trier is an incurable romantic. Despite the severe lashings his nymphomaniac, Joe (Charlotte Gainsbourg) endures, despite the beatings, the golden shower, the public fellatio, the abandonment of her husband and child and the career as an extortionist who uncovers pedophiliac desires (one of her marks doesn't even know he had), he posits a belief in a lode of human empathy and emotion however evanescent it may be. There's even a reference to Star Wars in Nymphomaniac: Vol. II in the form of two Jedi Knights whose sabers are erect penises at a gang bang--an interchange that is one of the few humorous moments of the movie. Seligman (Stellan Skarsgard), who has rescued Joe and who takes her confession becomes like an analyst who sleeps with his patient or one of the rogue priests who have become the scourge of the Catholic Church. But does that allow us to discountenance, the purity and beauty of the transference which takes place between them throughout both Nymphomaniac: Vol. 1 and II? Can we say that von Trier's provocativeness both as an artist and public figure (if his character Joe is a self-described sexual outcast he made himself an artistic outcast by proclaiming his sympathy for Hitler at Cannes and literally getting himself banned). There is a point towards the end of Nymphomaniac: Vol. II where Joe is on her way not to accepting her sexual addiction but to being the one in a million people who actually overcomes it when she discovers the soul tree that her father (Christian Slater) had originally told her about. She has climbed to the top of a mountain where she attains a certain level of peace. It seemingly shares little thematic connection to the denouement of the movie which involves murder, but it's significant. The belief in the humanity of the human being is hardly the conclusion of von Trier's art, but it's a dramatic moment on the map of the human condition that he's drawing. In the beginning Joe relives the memory of a spontaneous orgasm and a spiritual vision that occurred along with it. Only the vision is not of the Christ child and Mary, but of Magdalena the wife of the Emperor Claudius (who was one of the most infamous nymphomaniacs of all time) and of the Whore of Babylon.

"I'm a nymphomaniac and I love being one and above all I love my filthy lust,"

she screams at one point. The numbers and letters fly across the screen. The 40 Roman lashes she received was incorrect Seligman informs her. Christ received only 39 because they came in sets of three. K (Jamie Bell) is her torturer, L (Willem DaFoe) initiates her into a life of crime and P (Mia Goth), is her disciple. Seligman goes off on a long digression about the Prusik knot that Joe calls one of his worst, but which is really one of his best. The schism between the Eastern and Western churches of l054 compete with Zeno's paradox which is used to describe Joe's futile attempt to reach orgasm. Von Trier wraps his sentimentality in layers of meaningful intellect and literally excoriating sadism (the cocktail of sado-masochistic compulsion and child neglect is one of the most difficult parts of the film to watch). And he is far from providing either a recipe for or hope of transcendence or even peace. And yet Nymphomaniac: Vol. II, like its predecessor is almost unbearably human or unearthly if you regard his nymphomaniac as the ultimate Christ and anti-Christ, the outcast, whose holiness and suffering are totally invisible and misunderstood and who's falsely accused of blasphemy and condemned to flames by the living incarnation of Dostoevsky's Grand Inquisitor-her self immolating conscience.

{This was originally posted to The Screaming Pope, Francis Levy's blog of rants and reaction to contemporary politics, art and culture}