Protesters of the Occupy Wall Street: Public Space movement had hoped to take command of Wall Street on September 17, 2011, but the New York Police Department quickly showed them who was in charge, by barricading all entrances to the heart of America's financial institutions. Police began locking arms in front of the barricades and street lifts about 1:00 p.m. ET -- two hours before the General Assembly of the protest was scheduled to begin at Chase Manhattan Plaza. (The boys in blue obviously have a Twitter presence, too...)

The "Day of Rage" turned out mostly to be a day of peace. Only two arrests were made.

Media reports have called this movement "Marxist," "Guerrilla" and have claimed that the protestors are inspired by the Arab Spring. However, anyone moving through the crowd and listening to their conversations wouldn't come to that conclusion. While the word has spread through the best viral mediums available, including Facebook and Twitter, the theme is one that attracts people from all stripes of life -- Vietnam Veterans, moms, families with children, young professionals (in sunglasses, hoodies and/or masks) and students. The crowd was predominantly 20-ish, with a majority of males, however, many were educated, and quite a few of the "speakers" spoke with an economist vernacular that suggests some may even have jobs on the street they are united against. You can't even assume these are young Democrats; I saw more than one picture of President Obama with a Hitler mustache.

As Barbara Ross, the press coordinator of Time's Up (an environmental group) and a participant in Occupy Wall Street, told me, "Corporations are too powerful in this country. They control the media and are more powerful than the politicians. This is a way to say that we want to have a voice again." Some people brought flowers with them. Others brought handmade signs and billowing billboards. Barbara's bike sported the only professionally made sign I saw, with the slogan, "Bicycling Against Oil Wars." 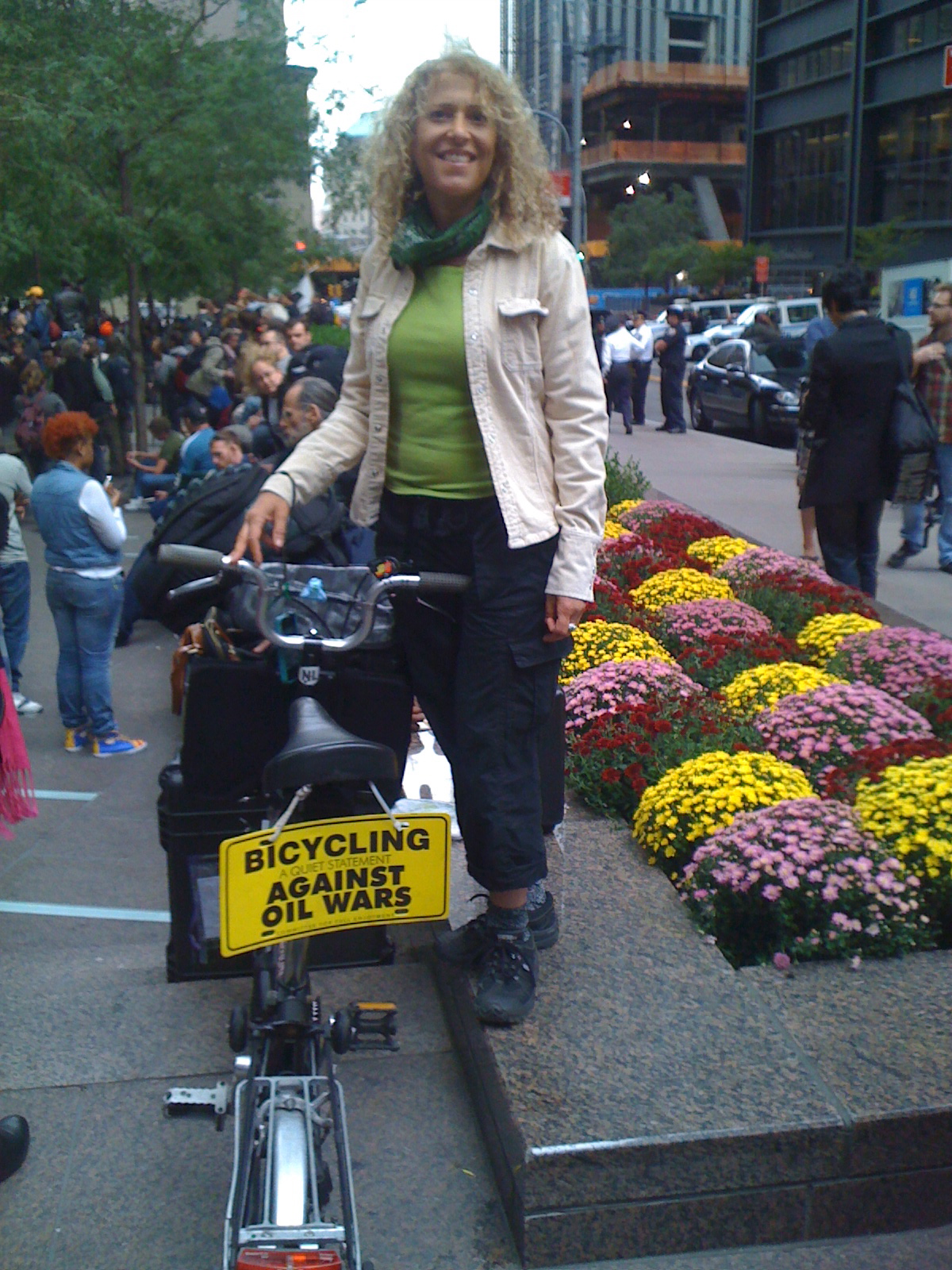 None of the flyers or the speeches that I witnessed suggested that Marxism, Anarchy or Violence is the answer. Most people sat peacefully and quietly in makeshift circles and took turns sharing what they thought should be the next step in this nascent movement. In fact, one young woman who posited that perhaps it was time for "Grass Roots Capitalism," was quickly corrected by another protestor, who suggested that Capitalism works -- when there is adequate regulation.

Indeed, it is quite apparent, that these protestors love their country and stand united against one enemy only. That enemy is not capitalism or free markets. That enemy is quite simply, cronyism economics. It is clear that everyone was there as part of a movement that is simply You Vs. Wall Street. Chants of "Occupy Wall Street," and "Banks get bailed out, we get sold out" were chanted as hundreds of people paraded by the NYPD -- on the opposite side of Wall Street, in order to avoid any possible confrontation -- on their way to destination #2 on the protest flyer, Zucotti Park.

One speaker, who looked too young to own a home or have a job (who was probably a student), complained that "Corporations can kill us. They can steal from us. They can systematically take people out of their homes. And they can do all of this because the laws are way too complicated, and they are all on their side and I'm really sick of that."

Another speaker worried that the protest wasn't sustainable. He suggested that the movement needed greater infrastructure and asked everyone to return to their communities to build the team there. "It seems like what we need are councils, local credit unions and schools for popular education. There are a lot of things that we can do that is not asking other people to solve our problems." This suggestion generated a lot of whoops from the crowd. And then the megaphone was passed to the next person in the circle.

On the evening of the 17th, protesters spent the night in the park, surrounded by police who made no attempt to break things up. Some people in the movement Occupy Wall Street slept on cardboard, others in sleeping bags and some locals went home to freshen up and return in the morning. They are cleaning up their trash and staying quiet. So far no violence or confrontation has erupted, though the police have erected a portable surveillance camera on the crowd.

On Day Two of the protest, Sunday, September 18th, 2011, a self-proclaimed war veteran stood out in front of Wall Street (by the barricades and between police officers), yelling, "Join us here tomorrow. Occupy Wall Street!" The park was filled with people eating bagels, apples and peanut butter. Some were folding up sleeping bags. Others gave an impromptu social media class. Plans are being made on what to do on Monday and how to make the movement stronger.

The police are staying quiet, but have a clear plan. A spokesperson for the Office of the Deputy Commissioner, Public Information wouldn't comment on how many officers had been deployed or what the plan is. However, for now, it's clear that the strategy is to keep everyone, except residents and workers, off of Wall Street.

Is this the beginning of a Main Street versus Wall Street movement across America? Yesterday, Day of Rage was #9 on Google's hottest searches.

Stay tuned in. I plan to report again on Monday.