On Sept. 20, around 270 New York University students and community members gathered together at the Kimmel Center's Rosenthal Pavillion for the 10th Annual Fast-A-Thon: Fast for Water fundraising dinner with a collective goal to raise enough money to build three wells in East Africa, namely in countries such as: Somalia, Kenya, and Ethiopia. This annual event is hosted by NYU's Islamic Students Association to boost awareness about Islamic traditions and raise money for a specific charity. This year's event was unlike past years in that it catered to a more diversified crowd and boasted a large outreach capacity. With 23 co-sponsors and 75 volunteers for the event, it was known from the very beginning, that new records would be established when the night was over.

At 6:30 p.m., crowds of students, professionals, and community members quickly made their way towards their seats. The massive, large scale Facebook promotions and positive word of mouth had served well to advertise the campaign and event. Within minutes, every seat in the room was occupied by individuals pledging to make a difference. As chairs of Fast-A-thon, I, along with a dedicated enthusiast, Fatima Kamran, spent a majority of our time this summer deciding on food and decorations, brainstorming ideas for large scale promotional efforts leading up to the event, and negotiating with several co-sponsors, guest speakers, and performers for the event. Attracting a crowd is perhaps more difficult than conveying a message. We had accomplished both. The best part however, was that the night was still young and the program was yet to begin.

The current situation in East Africa was an important issue to be addressed on a university level because it required global support from all individuals, regardless of their social, cultural or religious background. Millions of people across East Africa are still suffering from the effects of the worst drought in 60 years. With malnutrition, a chronic problem in the region, more than 13 million people have been affected and approximately 50 thousand people have died. Areas such as Somalia, Kenya and Ethiopia are among the countries most severely impacted. Without having water to drink, people can't live. Without water for their livestock, they can't eat or earn a living. Throughout the second half of 2011, famine spread through southern Somalia, taking its highest toll on children. These children that could have spent their time in school were spending their time searching for water.

Throughout the evening, inspirational speeches were giving by keynote speaker Ibrahim Abdul Matin, author of "Green Deen: What Islam Teaches About Protecting the Planet" and Imam Khalid Latif, executive director of ICNYU. In front of a crowd of hundreds, Ibrahim powerfully stated that "when you build wells you give people options. You are one step closer to healing the land." Connecting these thought evoking words to instances from his life and current statistics about water resources in America, he dared the audience into being advocates for change, "what is your generation going to do? You are the moment. You are the genre. If you vote you dictate elections." We may not be able to change the past but each individual has the power to dictate the future.

The idea of leadership is new to many young Muslims. I am very fortunate to have had excellent models of strong leadership during my years at NYU. Aliya Latif, a research associate at ICNYU, mentored me along the entire Fast-A-Thon planning process. She was an amazing educator. She would often call me on Sunday mornings, even though she did not have to, making sure that I knew exactly what I needed to accomplish for the event to be successful. I am truly grateful for her efforts. I learned a substantial amount about effective leadership and civic advocacy. These lessons will come with me as I graduate from NYU in the spring. I admire Aliya's determination, and her example makes me recognize that there is a greater satisfaction in taking part in such global causes. I saw how a brief and small call to action twitter campaign could serve as a powerful reminder, mobilizing many individuals, although temporarily, into a path for advocating change.

As the night progressed, Imam Khalid Latif embarked the stage where he began his talk by recounting Kevin Carter's iconic Pulitzer winning photo of a vulture preying upon an emaciated Sudanese toddler near the village of Ayod. This little girl is crawling her way to find food to eat. The vulture is waiting for her to die, so that it can prey on her. The message was clear. In the ideas of Elie Wiesel, the epitome of evil is indifference. The audience shed into tears, knowing that many in the room had practiced some sort of indifference, Imam Latif reminded everyone that "just because we help someone, doesn't mean that they are helpless."

Brian Ndirangu, a student from NYU Abu Dabhi restated, "hard to believe, the children dying of thirst and water-borne diseases have dreams. They aspire to be doctors, engineers...they hope to one day live to help their communities lead better lives. I joined Fast-a-Thon because it promises to offer these children a chance, not only to live but to live and fulfill their dreams."

Besides emotionally stimulating speeches, the night was decorated with entertaining performances by Sam Hasan, a musician and medical student at NYCOM. His soulful voice captivated the audience while African Dance Instructor, Alfdaniels Mabingo brought audience members out of their seats to join him in playing drums, diffusing an East African mood throughout the room. The evening ended with New Jersey's young rap sensation, Shahroz Ahmad doing acapella, encouraging the audience through his music "to take this water crisis as your human responsibility."

As a teen, I always envisioned a life of giving, caring, and taking initiatives in making this world a better and healthier place. I have always felt that I encompassed the talents and energy to better the global community. I realized that some of my most cherished memories at NYU included volunteering and helping out in previous Fast-A-Thon's. And as chair of this year's campaign, I wanted to take this event to another level where incoming students and volunteers could also feel the same connection when they looked back to their years at NYU. But what truly spoke to me about organizing this event was the fact that I've gained a strengthened sense of personal achievement, value, and increased confidence because I succeeded in bringing a positive impact on communities in East Africa. Through our dedication and commitment, we took it upon ourselves to educate and inform the community. From the unity of seeing people's profile pictures and cover photos as the Fast-A-thon poster to the various fundraiser events at the bottom of the Kimmel staircase during the month, the East African Water Crisis was never far from anyone's thoughts. And this constant presence helped to not only keep people informed, but to also remind them to reflect upon the strife of those people who are so many miles away from us. It's hard to explain the happiness I feel when I see NYU students who would not normally interact with each other, taking initiatives together as family, to raise awareness for the drought in East Africa. When future history books are written, I want people to remember NYU students as individuals who worked tirelessly, quietly, and peacefully towards the betterment of others.

The end of the dinner neared. We had crushed the evening's goal and raised more than $30,000 which was donated towards the Islamic Relief Water Crisis Campaign. Islamic Relief USA has consistently received a four star rating from Charity Navigator for many years. $30,000 makes 3 wells, gives 9,000 people access to clean water, and saves 9,000 lives. It also establishes three new community centers, taking three huge steps towards sanitation and stability.

The Fast-A-Thon fundraising dinner was the culmination of a month long effort to raise awareness for East Africa. The month of September was devoted to hosting several bake sales, a social media campaign on Sept. 12th in which more than 225 individuals tweeted using #ICNYU4Africa, and a water drop campaign in which donors were asked to sign their names on water drops which were displayed across the NYU Kimmel Center lobby.

Cyan McFarlane, the Domestic Chair for Alternative Breaks at NYU eloquently expressed through her personal reflection, "whether you see someone on campus that you worked with during one of the fundraising events or that you happen to stumble upon the Fast-A-thon event page, let it be a reminder not only of what was accomplished by everyone's time and commitment, but also to remember why we chose to commit ourselves to this cause."

For those of you who couldn't make it out last week to the ISA's Fast-A-Thon for East Africa, but are still interested in making a contribution, you can do so online at http://bit.ly/PqIWLb. We'll be keeping that link up for another week.

Below, click through to see some photos from the Fast-a-thon: 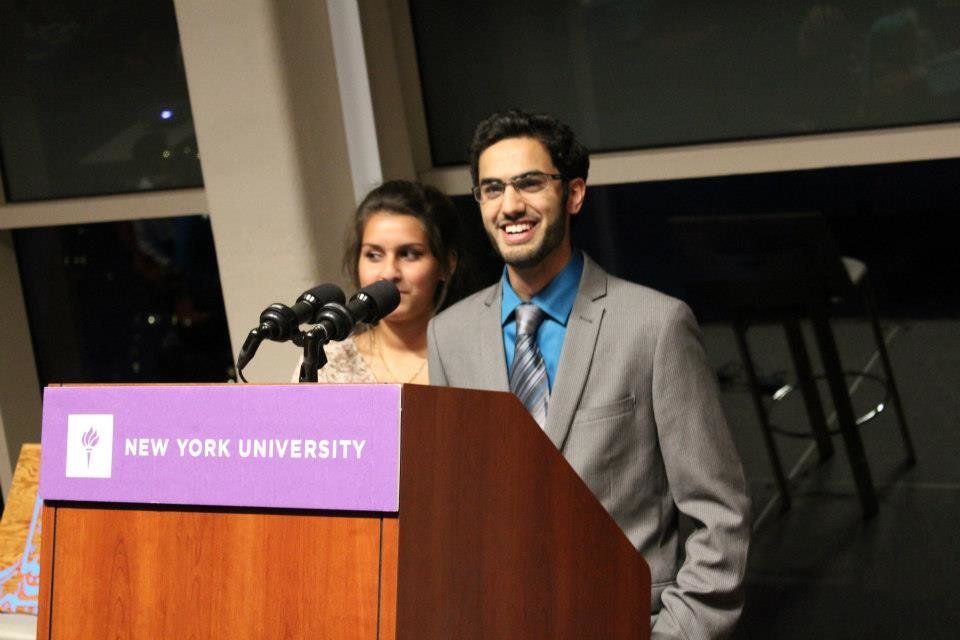