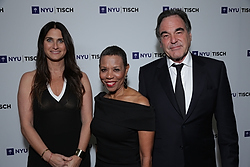 Los Angeles patrons of NYU's Tisch School got a taste of New York at the 2013 Tisch School of the Arts Gala held at the Beverly Wilshire Hotel.

Over 350 guests came to celebrate Tisch graduates, including Film legend Oliver Stone and award-winning producer Liza Chasin, who were both honored at the star-studded event.

The hotel's ballroom was transformed into a New York Broadway-style set where Tisch students and alumna performed dance and musical performances to New York-themed music throughout the evening.

Chandra Wilson from Grey's Anatomy and Tony Award winner Steve Kazee from Once were the co-hosts for the event. Both attended the Tisch School and credited their education for their success.

It was pointed out that according to Ranker, Tisch had more professionals working on the Top 500 films of all time than any other school.

Universal Pictures Chairman Donna Langley presented the "Big Apple Award" to Chasin and said, "Liza sets the bar at great." Chasin told the crowd, "The first question I get is why did I choose Tisch? Everyone told me if you love film go to LA. If you want to learn about the business, go to Tisch." Chasin described herself as a serial monogamist, both personally and professionally when she spoke of the team she's collaborated with that resulted in her Executive Producer credits of Les Miserables and Anna Karenina.

One of the musical highlights of the evening included Kazee singing "Falling Slowly" from Once, along with students from the Tisch School.

Martin Scorsese, who was not present, sent an introduction about Oliver Stone and pointed out that Stone was one of his students. Award-winning writer and Tisch Alumnus Stanley Weiser gave the award to Stone and reminisced about how the two met at NYU while editing films at night. "Like a world class athlete, he pushes you to reach great potential," said Weiser of Stone.

Accepting the award, Stone, responsible for films including Born of the 4th of July, JFK, Nixon, and Wall Street, said he loved the idea of watching movies all day and getting credit for it. He reflected on how kept writing rejected screenplays until years later, one was not rejected. "There's something about the pursuit of the truth...24 frames per second that can change the world," said Stone. 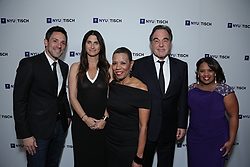