Ken Blackwell is no longer my friend.

After my last column endorsing him for the RNC Chair, I was abruptly de-friend-ed/dumped from his Facebook profile -- proof that he is in fact getting tech savvy. He also took down the embarrassingly lame YouTube videos from his 2006 gubernatorial campaign, which still only had a couple hundred views after all this time. His super-fast, Internet-like response to my endorsement might have been tipped off when I posted a Tinyurl link on his Facebook wall to my piece here on Huffington Post. 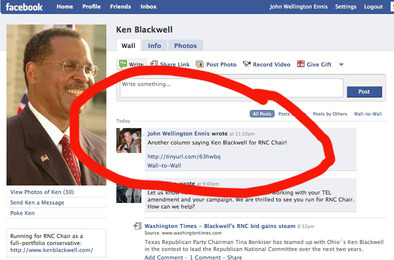 And there on his Facebook profile I happened to notice the only film Ken Blackwell had put down as his favorite: The Coen Brothers'O Brother, Where Art Thou? This struck me that: A) He shares one of my favorite films by my favorite filmmakers, and B) What did he like so much about it to list it as his only favorite?

Does Blackwell really, really like Bluegrass? The film is arguably a Bluegrass musical, and its soundtrack sold millions. It stands out to me that the film centers on a governor's race between two corrupt hacks only decided by the incumbent's last-minute shameless play unlike anything before, and the other guy being a racist. Maybe he's got a thing for Clooney -- but who doesn't?

Maybe something in Ken Blackwell knows he should be singing himself -- on a chain gang, for any of the number of electoral crimes that I could only begin to cover in my film FREE FOR ALL!

Blackwell will assuredly becoming more tech-savvy now that his loyal IT tech guru, Mike Connell (featured in this clip from my film) has died inexplicably in a solo plane crash.

Mike Connell was a GOP PC Platform in himself. He made literally every major Republican campaign website, including for Ken Blackwell and the Ohio GOP, and then would get the government jobs and access from them in office under a different company name. Mike Connell made the website for the Swift Boat Vets for Truth.

The already suspect details of this plane crash will continue to develop. It is significant in its timing, in that Mike Connell had finally just been deposed under court order in an ongoing lawsuit against Ken Blackwell. His deposition, by attorneys Cliff Arnebeck and Bob Fitrakis, was the Monday before this past Election Day. Mike Connell had received death threats since the summer, and despite a formal request to provide him with federal protection, the Attorney General did not grant it. Talk about a man of constant sorrow.

As Mike Connell's client for both Republican party web sites and Ohio state IT work, I sincerely hope that Ken Blackwell will get to pay a visit to Mike Connell's widow, Heather and their four children, who will be having the worst Christmas of their lives, and assure them he will use his leadership to confirm beyond a certainty the exact causes of their father's death, no matter what.

Or, they could just watch movies. Any suggestions?