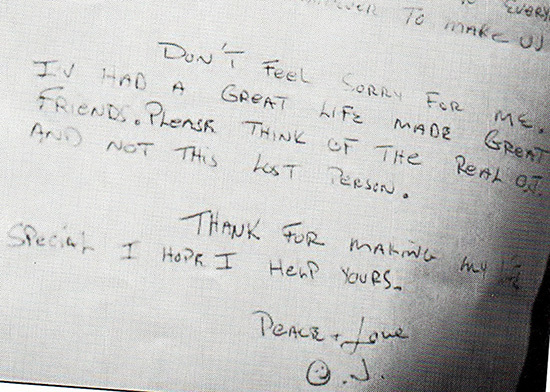 In my forthcoming book "The Saga of Smiley," which chronicles the history of the Smiley Face icon since it was created in 1963 by artist Harvey Ball in Worcester, MA, there is a chapter about the surprising number of murderers and criminals who have incorporated Smiley into their signatures.

Among them is O.J. Simpson, whose "suicide letter" was read to the media by Robert Kardashian on June 17, 1994, while O.J. was fleeing on his famous white Bronco ride that glued everyone in the country to their TV sets, waiting for the conclusion: would O.J. kill himself, escape the cops, or what? Trending on the internet today, because a 10-episode FX TV series based on the OJ. Simpson case begins, ('The People v. O.J. Simpson--American Crime Story") is the news that the letter showed that O.J was nearly illiterate, and his attorney Robert Kardashian edited and improved it as he read.

What was not in today's news was that O.J. actually signed what seemed to be his suicide farewell with a smiley face in the letter "O"!

Here is the section from "The Saga of Smiley" that deals with O.J.:

No discussion of Smiley's life in crime would be complete without mention of the Smiley Face that O. J. Simpson added to the "suicide letter" he wrote in June of 1994.

After the murders of Nicole Simpson and Ronald Goldman were discovered on June 13, 1994, O. J. Simpson's lawyers promised that Simpson would turn himself in at 11 a.m. on June 17. A thousand reporters were waiting for him at the Los Angeles Police Station, but O.J. didn't show up. The police issued an all points bulletin. At 5 p.m. Robert Kardashian, his close friend, who is today perhaps better known as the father of Kim and her siblings, read a letter written by Simpson to the media.

It said that Simpson had nothing to do with Nicole's death, it thanked two dozen of his friends, and it ended, "Don't feel sorry for me, I've had a great life, great friends. Please think of the real O. J. and not this lost person. Thanks for making my life special. I hope I help yours. Peace and love, O. J."

And he drew a Smiley Face inside the "O".

About an hour and 20 minutes after Kardashian read this letter, which everyone interpreted as a suicide note, a motorist saw O.J. riding in a white Bronco that was being driven by his close friend A. C. Cowlings. There ensued a long, slow-motion car chase, while police and friends tried to convince O.J. to pull over and turn himself in, crowds of helicopters filmed from above, and millions of TV viewers around the world watched the chase in fascination, waiting to see if it would end in a suicide, a crash or a confrontation with the police.

It ended at 8 p.m. as the car and O.J. arrived at his Brentwood home, his young son came out to greet him and he went inside to talk to his mother and drink a glass of orange juice. Three days later O.J. was arraigned and pleaded not guilty to both murders. (Ultimately, after an eight-month jury trial, Simpson was acquitted.)

So what about that happy face in the O of his signature? Was O.J. happy, sad, or suicidal when he drew it? People are still debating this question. The driver, A. C. Cowlings, reported that during the ride O. J. was holding a gun to his own head. But it's doubtful that he really intended to kill himself that day. Here's what police found in his car afterwards: $8,000 in cash, a change of clothing, a loaded .357 Magnum, a passport, family pictures, and a fake goatee and mustache.

What prompted O. J. Simpson, "Happy Face Killer" Keith Jesperson, and possibly the gang of Smiley Face Killers, to include the Smiley Face in their signatures? Were they trying to convey their love and joy, their ironic glee at spilling blood, or something else altogether? For each individual, Smiley may have meant something different--but it certainly meant something important.

Everyone who uses a Smiley is trying to communicate something emotional that written words are not adequate to convey. That's exactly what led to the most prevalent manifestation of Smiley in the twenty-first century--the emoticon, and its offspring, the emoji. Happily, these days people who include Smiley in their signatures aren't murdering anyone--except, in some cases, the English language. XO XO, ☺"

A Rolling Crone, blogging about travel, art, photography and life after sixty.