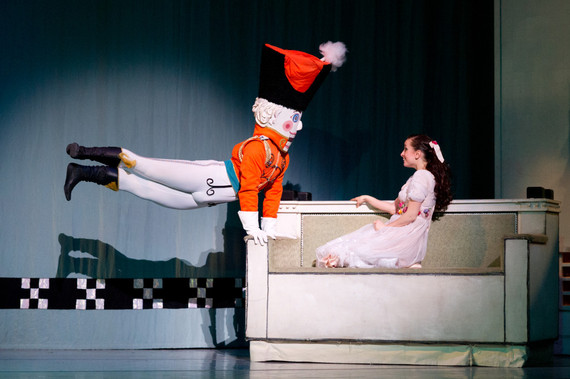 Stephanie Salts as Marie and Robert Dekkers as The Nutcracker in Oakland Ballet Company's production of Graham Lustig's "The Nutcracker." (Photo: David DeSilva)

Ballet to the People gatecrashed a lecture-demonstration by dancers from the Oakland Ballet Company at Burckhalter Elementary School on Thursday morning, surrounded by an enthusiastic, engaging and well-mannered crowd of third graders. As Sharon Kung, Megan Terry, Greg DeSantis, and Vincent Chavez gave a capsule history of ballet, and performed excerpts from The Nutcracker, the kids sat, rapt, occasionally exclaiming in awe at the jumps and turns and dramatic overhead lifts.

Even in the tight quarters of the classroom, the lucidity and grace of Graham Lustig's choreography shone. Terry and DeSantis as Marie and her Nutcracker Prince were particularly affecting in the Snow scene pas de deux. The small but spunky Sharon Kung showed off her knife-like jumps in swirling Russian robes, and Vincent Chavez, dashing in his Spanish costume, drew whoa's from the crowd with his speedy footwork and grandes pirouettes.

"Does anyone know who wrote the music for The Nutcracker?" Greg DeSantis challenged the wide-eyed audience.

A few hands shot up.

Another curious boy asked Ballet to the People why she was taking notes. When informed that she would be writing an article for a newspaper, he spelled his name for her, carefully, in case he would be quoted. The girls on either side of him volunteered their names, too. Ballet to the People thanks Cheszon, Tashiko and Amirah for being such excellent ambassadors for their school.

She caught up with principal Carin Geathers and co-principal Clara J. Roberts in Burckhalter's impressive computer lab after the ballet demonstration. Geathers and Roberts run a tight ship, with 325 students on board, and appear to work miracles despite frequent cuts in funding, particularly in the area of arts education. Burckhalter is one of the oldest elementary schools in the Oakland Unified School District and, while it is known for the strength of its science curriculum, it also boasts a strong performing arts enrichment program in the summer (with ballet taught by an illustrious faculty that includes former alumni of Dance Theatre of Harlem) and a yearlong instrumental music program. Like Oakland Ballet, the Oakland East Bay Symphony, led by the masterly Michael Morgan, have long been active at the school. 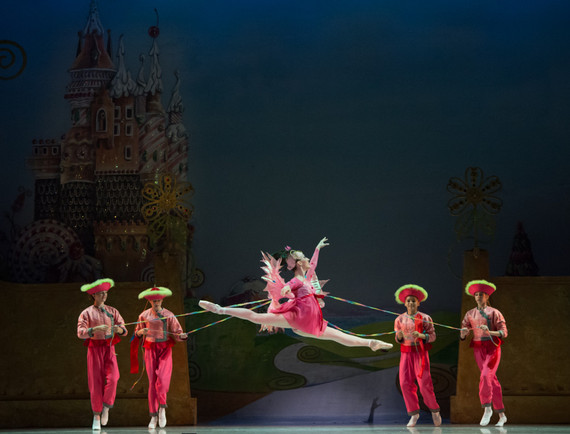 Coreen Danaher as the Chinese Nightingale along with Danica Adams, Olivia Keller, Alexis Scott and Olivia Cole as the Chinese Emperors in Act II of Graham Lustig's "The Nutcracker." (Photo: David DeSilva)

Kaiser Permanente and the Matson Foundation have supported Oakland Ballet's outreach into the local schools for years. Nevertheless, Oakland Ballet has not been immune to the economic tempests that have buffeted a city most recently rocked by the fallout from the contentious Occupy Oakland movement, a city whose long history is marked by great social and political upheaval. Oakland Ballet's own distinguished history traces back to Diaghilev's pioneering Ballets Russes, and as it approaches its 50th anniversary in 2015, it has, hopefully, put its rockiest years behind it. Lustig reminds us that the company is an integral part of Oakland's vibrant arts community, and cites strong support from the City of Oakland, as well as from his board, that this year has enabled him to commit to three performances of The Nutcracker at the legendary Paramount Theatre -- possibly the grandest venue in the entire Bay Area for the performing arts, a veritable Art Deco "palace to art" -- plus a Spring season of contemporary work.

"Ballet must constantly move forward," he noted, whether it is refurbishing classic works for modern audiences, or boldly experimenting, "It can't be a museum, it should be a modern art gallery." He harked back to his performing days with the Dutch National Ballet, at a time when Rudi van Dantzig and Hans van Manen were breaking new ground with a fusion of modern dance and classical ballet, shot through with strong strains of social criticism. Lustig's task is made easier by a handful of gifted Bay Area choreographers whom he admires.

He is hopeful that a Fall season will become a reality in the near future.

In the meantime, his imaginative Nutcracker is about to delight East Bay audiences once again, with live music by the Oakland East Bay Symphony. 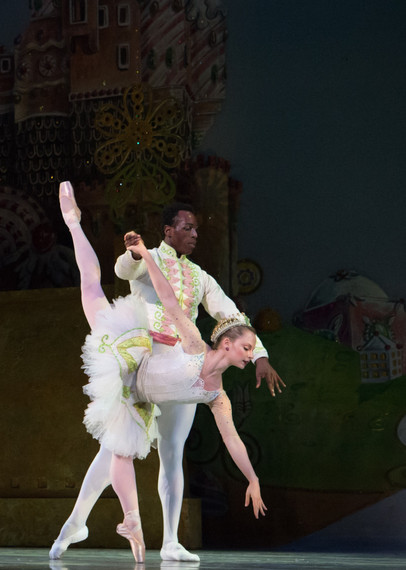 Chantelle Pianetta as the Sugar Plum Fairy and Bobby Briscoe as the Cavalier in Oakland Ballet Company's production of Graham Lustig's "The Nutcracker." (Photo: David DeSilva)

The Nutcracker is one of the proudest immigrants to America, though its Russian accent is now barely discernible. San Francisco was home to the first full-length, home-grown Nutcracker, by Willam Christensen, in 1944. It has since grown into a multi-million dollar industry, eagerly adopted by a young country with relatively few traditions of its own, attracted to The Nutcracker's Norman Rockwell-like vision of domesticity and its taming of an essentially pagan holiday of "misrule," which in ancient times was marked principally by drunk and disorderly conduct.

The Act I transformation of a jolly party scene into a battle between malice-minded rats and pure-hearted toy soldiers could well express what scholar Jennifer Fisher termed "anxiety about rapid industrialization and constantly shifting social conditions... [and] great longing for an idealized domestic celebration, the same way the current annual Nutcracker boom may benefit from nostalgia for 'simpler times.'"

Created originally for American Repertory Ballet and reset on Oakland Ballet when Lustig assumed the artistic directorship three years ago, this Nutcracker is set in the early 20th century, at a time when women were winning unprecedented new freedoms. Independent-minded suffragists who disdained bonnets, corsets and hoop skirts in favor of less constricting gowns were the inspiration for Lustig's female characters, particularly his young heroine, Marie.

Interestingly, British-born Lustig grew up never having seen a Nutcracker. (Christmas pantomime and ballets like Frederick Ashton's Les Patineurs and Cinderella were the more popular holiday fare.) Free from the spell of historic productions, Lustig went back to his Viennese roots for design inspiration: the paintings of Gustav Klimt, and the silver birches in the Snow scene, rather than the archetypal pine trees peppered with snow. The constraints of a small company dictated, for example, that he could only field eight snow maidens instead of the traditional army, so he peopled the Snow scene with youngsters costumed as snowballs. Beauty and humor go hand in hand as a multitude of roly-poly, rosy-cheeked children tumble around the stage at the feet of the glamorous, ethereal snow maidens.

For Lustig and Oakland Ballet, it is this tying together of the local community in one glorious spectacle -- professional dancers and young, aspiring amateurs, partnered with the local symphony and choruses -- that is the true magic of Nutcracker.

Catch the Oakland Ballet Company with the Oakland East Bay Symphony in The Nutcracker at the historic Paramount Theatre on December 21st and 22nd at 2:00 p.m. and December 24th at 11:00 a.m.