When you are a baseball fan, spring is a time of hope and delusion. This year, if you are an Oakland A's fan, you can imagine that the A's will be fun to watch, if not a contender against the loaded Los Angeles Angels of Anaheim.

Despite a fire sale of pitchers over the winter, there are still some creditable arms, and the acquisition of Manny Ramirez (who will be available after he serves his most recent 50-game drug suspension) and Cuban refugee Yoenis Cespedes, who homered in his first exhibition game, could provide some pop.

I am looking forward to our season ticket draft and to going to some games. Unfortunately, after a concerted five-year campaign by the existing owners to degrade the experience at the Oakland Coliseum and discourage people from attending, I will be pretty lonely and feeling a bit like a chump.

Attendance has declined every year under the present ownership of John Fisher and front man Lew Wolff. During the five years before Fisher-Wolff bought the A's, the average annual attendance was about 2.1 million. The average of about 26,000 a game was in the middle of the pack in the American League.

It is a sorry situation. Fans are depressed and determined, not happy and hopeful. there are few young people, as there are at AT&T. 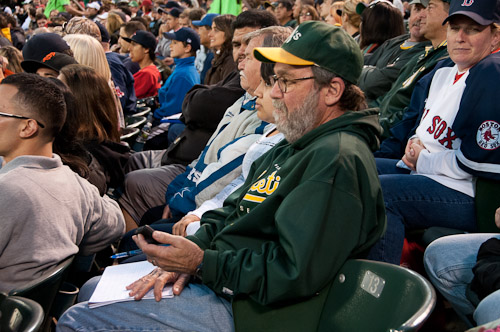 The ballpark is a pit. It is embarrassing to bring fans of other teams there. It was not always this way. During the glory years of ownership by the Haas family, this same Coliseum was rocking. In 1990, Oakland drew 2.9 million people, second in the league.

Wolff has made a career of saying that baseball cannot succeed in the Coliseum. This, along with the failure of the ownership to invest in the plant, has been a self-fulfilling prophecy. Such gloom is wrong and I am going to discuss the myths and the solvable problems. I have some basis for an opinion as I have been attending regularly since 1972.

Myth No. 1: "The modifications of the stadium for the Raiders have made it worse for baseball." This is 100% nonsense, propagated by people who have drunk the ownership's (and the Giants') Kool-Aid. The most annoying to me is Peter Gammons, who was fond of badmouthing the Coliseum during his sporadic Friday morning calls on KNBR. The true fact is that the large football seating structure in the outfield blocks the wind and raises the cool nighttime temperature. The supposedly wonderful former view that is now blocked by "Mount Davis" was totally uninteresting: nothing to see at night and a hazy view of scarred East Bay hills in the daytime. No one noticed this vision until it became fashionable to complain that it was gone. The jagged shape of the outfield wall causes interesting plays and the individual outfield seats are higher and better. The only real problem is that the A's sell boxes in the outfield from which one needs a TV to follow the game. 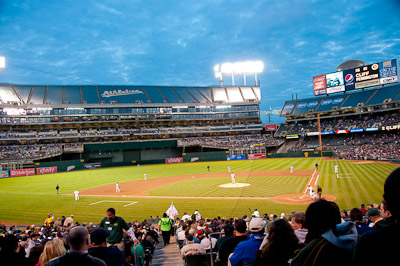 Problem #1 There is little edible food. In the 1980s, the food at the Coliseum was miles ahead of the Giants at Candlestick. Nationally, ballpark food has improved considerably since then, but, if anything, the food at the Coliseum has gotten worse and more limited, now largely descending to the quality you find at traveling carnivals, limp hot dogs and watery beer at most stands. I bet Lew Wolff would not eat a "Coliseum Dog" except at gunpoint. To be honest there is some decent beer available at a couple of stands. There is a BBQ stand, that used to offer a variety of custom meats and meals and now offers prepackaged dinners. There is a Saags sausage stand behind the plate, but that brings us to the next problem. 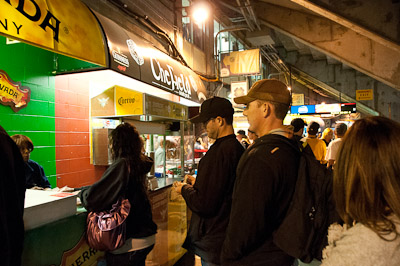 Solvable Problem #2: The service of the food is abysmal. It is slow and from most stands, you cannot see the game. If you want a Saags sausage, which tastes good, count on missing an inning or two. Look at this stand. Are we getting a sausage or trying to rob a bank? 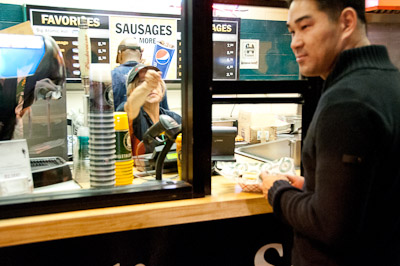 There were finally monitors put in, but they often don't work. 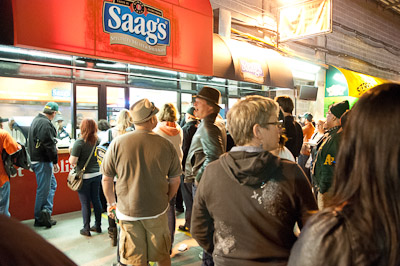 There is no reason why they can't put in functional monitors and tear down the panels that block the field. There need to be more workers and a better system to speed the delivery of food. For example, at a stand that sells tacos, I ordered one and then waited half an inning while they made it. This is stupid. The workers are as demoralized as the fans and the whole experience is horrible.

Solvable Problem #3: Lousy scoreboard. The scoreboard is fifteen years old and not up to snuff. We have all been to AT&T and know this. The pictures are not HD and they are too small. It would be better if they were not situated for football, but the main problem is that they are archaic. Minor league all the way. 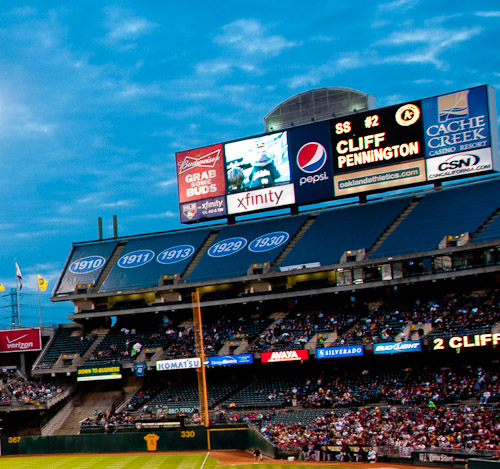 Myth No. 3: "The seating configuration is hopeless." It is the same configuration that drew 2.2 million in 2003 and 2004 and 2.9 million in 1990. The seats behind the dugouts are distant because the field is circular, but the second deck seats are about as close as AT&T where no one seems to mind. The "view" seats at AT&T are a mile away, but there they are filled every night. 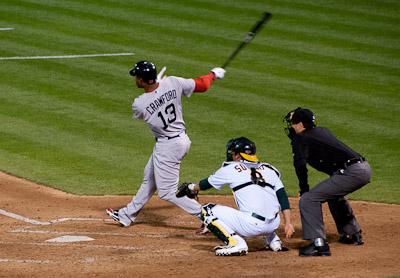 Solvable Problem No. 4: Badmouthing the product. Wolf has been negative about the Coliseum and has been unwilling to put money in to fix the place up. All he is doing is aiming for San Jose, which is where his operations are centered. I can't prove this, but my sense is that far fewer people are selling season tickets than back in the Haas days. They used to call several times a winter. 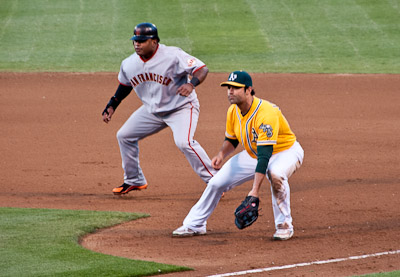 Myth No. 4: "There is no economic base." In their hey day, the A's commanded the East Bay from Oakland to Sacramento, where they have a farm team. Now, there are more Giants hats around than A's, even in Alameda County. This is a marketing and product failure. The Warriors, playing 50 yards away, are fabulously successful economically, even though they have been in the playoffs twice in the last nineteen years. Wolff and Fisher bought the team at a bargain price of $180 million. Forbes.com says the team is now worth $304 million.* The San Francisco Chronicle says there are suitors to purchase the team and operate it in Oakland. One can only hope.

*updated to reflect 2011 numbers from Forbes. 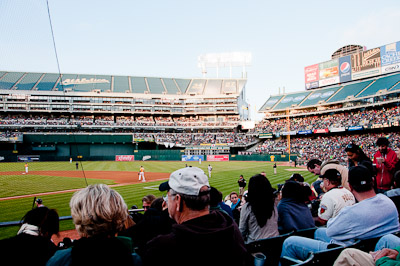