SAN FRANCISCO -- Late Monday evening, a group of Oakland police officers busted into the city's newest library, kicked everybody out and put bars on the doors.

The Victor Martinez People's Library, named for the Chicano author who died in San Francisco last year, had only been open since 7 a.m. But over the course of that day, the formerly vacant building near the intersection of Miller Avenue and International Boulevard transformed from an empty, blighted space into a functional library.

Dozens of activists, many associated with the Occupy movement, entered the unlocked building, which alternately served as a library, school and social services center until the city closed it in 2010, and immediately went to work replacing the results of years of neglect. Trash, discarded mattresses and graffiti were removed to make room for the makeshift lending library of books donated by the community.

By the afternoon, visitors had begun wandering in, and organizers were gearing up for an evening potluck dinner and poetry reading.

Reaction from area residents was positive. "There's nothing in this area, really," Goldie Simmons, whose husband is the pastor of a nearby church, told the Oakland Tribune. "There's really no place for kids to come."

Despite its day-long success, authorities carried out the building's eviction without a hitch. Everyone involved left the premises peacefully.

Oakland's Redevelopment Successor Agency originally shut down the space due to long-standing structural damage stemming from the 1989 Loma Prieta earthquake. Recent years have seen repeated talk about renovating the space, but city officials have yet to take any concrete action.

The building once was an ornate space with built-in wooden bookshelves and high ceilings decorated with molding. Completed in 1918, it was one of four branches funded with a Carnegie grant. But Jaime Silva, one of the activist organizers, said the property had gone mostly unused since the library closure, attracting squatters and illegal dumping. For years, he said, it's been "a dark place that sucks the life out of the community."

"If you live in this community, we only ask that you think about how you can use this building. Name it anything you like. Purpose it to any goal that benefits the community--library, social or political neighborhood center," said the library's organizers in a statement.

"All we ask is that you keep it out of the hands of the city," the statement continued, "which will only seal the fence and doors again, turning the space back into an aggregator of the city’s trash and a dark hole in the middle of an embattled community."

The library project hasn't been abandoned. Instead, it's moved to the sidewalk in front of the building, where books are lent out of crates, neighborhood children garden on a nearby patch of grass and residents enjoy nightly potlucks.

This action is just the latest in a series of occupations in which East Bay activists attempt to convert unused parcels of land into functional community benefits.

In May, roughly 100 police in riot gear raided an encampment dubbed "Occupy The Farm," where a number of individuals had converted a space used by the University of California for agricultural research into a working farm.

Public libraries in Oakland have been under fire due to tight budgets for some time. Last year, the city floated a plan that would have shut down 15 of the city's 19 libraries. Local activists managed to avert the action.

Check out these pictures of the Victor Martinez People's Library courtesy of Flickr user LazyEyeDude: 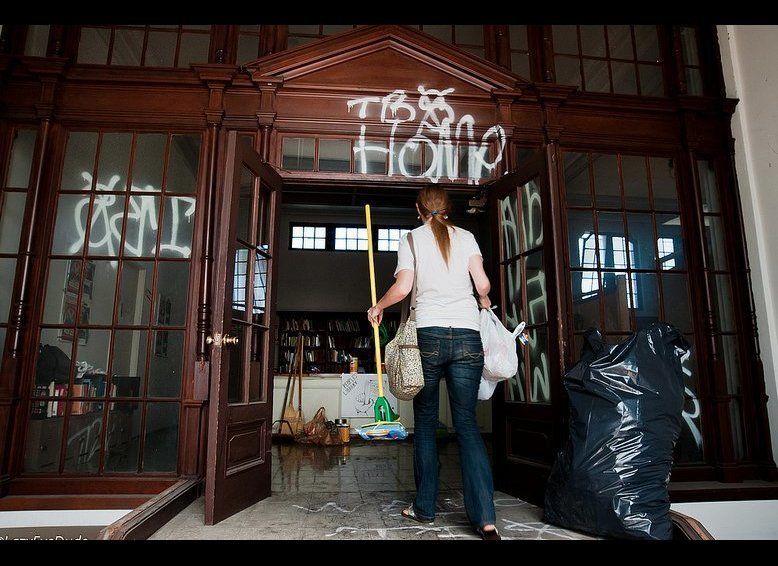