A bizarre-looking ocean fish that marine experts say could be the origin of some “sea monster” legends washed ashore in New Zealand last week -- then mysteriously disappeared.

The nearly 10-foot-long oarfish was found at a salt marsh near Otago Harbor in Aramoana on Thursday, the Otago Daily Times reports. The local who found the scaly animal called Department of Conservation service manager David Agnew, who said it’s the first time he's spotted such a creature in his 20 years on the job. 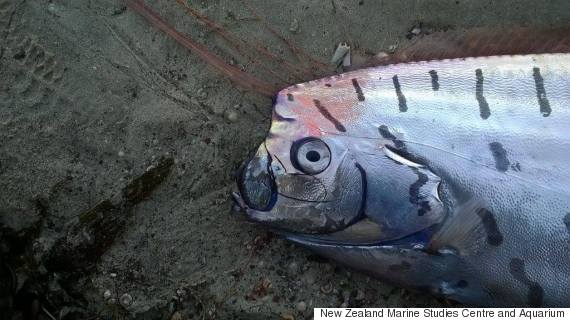 Agnew told the Daily Mail he had never even heard of an oarfish before. “It’s incredibly rare to see them in New Zealand,” he said.

Researchers from the Otago Museum took some samples of the fish for study, but did not have the resources to remove and preserve the entire carcass, natural science curator Emma Burns told the Otago Daily Times. She noted they had not determined the sex and age of the fish, but did know that the critter consumed a “big feed of krill” before its demise. 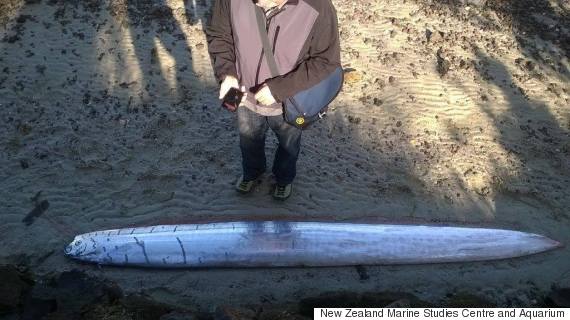 By Friday, the fish had disappeared, and it’s unclear if the body was washed away by the tide or removed by humans. Agnew warned anyone who may come in contact with the fish not to eat it, since no one knows the cause of death.

Plus, the meat doesn’t even taste good, according to Burns. She told the Daily Times the flesh is “quite gelatinous.”

“Oarfish” describes a group of fish that includes four species. One of these, the giant oarfish -- also known as the “king of herrings” -- can grow up to 36 feet long. Oarfish can be found worldwide, though sightings of live oarfish are relatively uncommon.

The fish are known for the ability to “self-amputate.” Though some media sources say the fish accomplishes self-amputation by biting off their tails, FishBase.org and the Encyclopedia of Life both indicate that oarfish -- which are toothless -- simply detach the back part of their bodies. Though it’s unknown why oarfish self-amputate, they do so several times over the course of their lives, according to the Encyclopedia of Life.

Since the huge fish have a history of washing up on beaches and floating near the surface of water, they “may be the origin of some ‘sea monster’ myths,” according to a Facebook post by the New Zealand Marine Studies Centre and Aquarium.