He giveth, and he taketh away.

President Barack Obama has rightfully received positive reviews for his proposal this past week to raise vehicle mile per gallon standards for cars to 39 mpg and light trucks to 30 mpg by 2016, for a combined "corporate average fuel economy," or CAFÉ, of 35 miles per gallon. Harmful emissions will also be lowered dramatically by the rise in fuel mileage.

But his administration also just gutted $100 million worth of federal research into hydrogen fuel cell EV technology for cars and trucks. Is there a White House technology double-standard, is it more Obama-ish realism or are oil companies lobbying as they must to keep their black gold from turning into clean, abundant hydrogen? 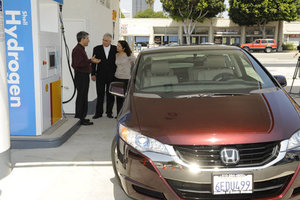 People get instructed on how to fill 'er up when their Honda FCX Clarity hydrogen-fueled fuel cell sedan (there's a mouthful) needs a pit stop; the gas station is a Shell facility in West Los Angeles, CA, fitted in 2008 with hydrogen fueling equipment

Some of the people gathered at the White House with Obama to cheer the mpg increase are angry that hydrogen is not only apparently taking a back seat to plug-in EVs and hybrids, clean diesels and conventional gasoline engines as far as Washington is concerned, but is now practically off the table, without the important implied endorsement of the US government which comes from the research project.

Why can't we do it all? This is for our planet's future, after all. What's $100 million these days for such a promising - and proven - technology?

Now, rather than spend $168 million in ongoing automotive hydrogen fuel cell research in 2010, new Secretary of Energy Steven Chu cut $100 million from that total and said the remainder would be spent on development of stationary fuel cells, not for cars, but which are used as backup power systems in factories and as primary electricity providers in remote areas where traditional energy sources might not be the best solution (large industrial fuel cells are already fairly common in Asia and Europe, and they're being developed for home use, too). 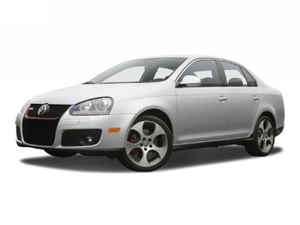 Volkswagen's 2009 Jetta TDI clean diesel is a remarkable auto which manages over 40mpg from its twin-turbo, 140-horsepower diesel four-banger; it's the 235 foot pounds of torque which make it fun to drive! But why not continue government R&D funding into hydrogen fuel cell EVs which could eventually replace most internal combustion engines of all types?

Chu has a background in biofuels and has received heavy criticism for this move. Detractors say he hasn't had enough hands-on experience with hydrogen fuel cells to make an informed decision.

The concept of fuel cells has existed for almost 200 years; they were first put into practical use for the US space program, beginning with the first manned Mercury space shots in the 1960s. To this day, fuel cells are used onboard space ships and satellites to help provide power, oxygen and water.

Fuel cells use an electrolytic process to strip hydrogen from whatever is being used as a fuel and remake that hydrogen into electricity and pure water. In fuel cell-powered cars, apart from electricity, the only other product is H2O.

Hydrogen is the most common element in the universe, so using it as a fuel for fuel cell EV cars and trucks makes a lot of sense; we won't run out of hydrogen anytime soon. Or, scientists say, anytime.

But the technology has a host of long-term and expensive problems. Just delivering hydrogen to filling stations and storing it safely on-board a car or truck is a big challenge.

Also, many say that no matter how much electricity a fuel cell may make, the entire process requires more energy than the result to produce it. 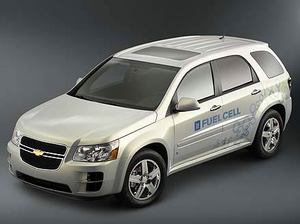 Ask most people "in the know" about hydrogen fuel cell automotive technology and they'll usually say, "It's 20 years down the road."

But they've been saying that for 20 years.

In the meantime, Honda and General Motors have put hundreds of their Segue and FCX Clarity hydrogen fuel cell vehicles into the hands of real drivers and they're on American roadways every day, racking up miles and real-world experience. Those companies have spent hundreds of millions on these projects, while seeing that Washington was supportive, and have budgeted for more; they're not happy with Energy Secretary Chu's decision (I'll be driving Honda's FCX Clarity next week and the Chevy Volt and BMW's Mini E plug-in electric car two weeks after that and will report on those experiences in this space). 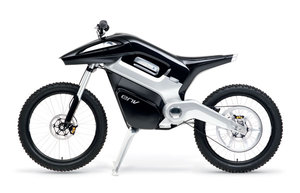 A fuel cell EV motorcycle being built and marketed by a company called ENV; fuel cell technology can allow hydrogen to power everything from the smallest to largest vehicles

Overseas, the Japanese government leases fuel cell cars from some of their domestic car-makers for the astounding sum of $7,000 a month to encourage research into the technology; "priming the pump" of their manufacturing industry and protecting car-makers from unforeseen losses. And several companies and governments in Europe are involved in similar programs.

While "20 years to viability" might be true, why cut this $100 million now, when the rest of the world looks to the US for leadership in this technology? It only moves mass-production of these cars back more and more.

The move puts a chill on hydrogen fuel cell research worldwide; if car-makers think they won't be able to sell a product in America, if the hydrogen delivery infrastructure is not built here for another 20, 50 or 100 years, they won't spend the time, money and brain-power in creating these pure, non-polluting, non-plug-in and off-the-grid EVs of the future.