Will Barack Obama use socialist tactics to spread the vegan agenda? Red meat-lovin' red-staters will really be seeing red after watching this clip from Talking Points Memo, which caught Obama on Wednesday confessing to a crowd at a rally in Raleigh, North Carolina that, as a kindergartner, "I shared my peanut butter and jelly sandwich."

Oh, sure, it sounds innocent enough. That's because you haven't heard about a shadowy group of subversive sandwich shillers called The PB & J Campaign. No, they're not a bunch of bread boosters, or a front for the peanut lobby, or the jelly industry. The PB & J Campaign is a nutty group of "private citizens concerned about the environment" on a feel-gooey mission to convince Americans to "fight global warming by having a PB&J for lunch."

The PB & J Campaign's website is full of pro-plant propaganda illustrating just how much kinder to the environment a plant-based diet is than the resource-hogging, planet-polluting, livestock-based diet that most Americans eat. Their diagrams make the case for shortening our food chain, i.e. eliminating the middleman--or, rather, cow, pig, or chicken--and consuming plant foods directly:

In any pyramid, taking out a level lets you shrink the base. So, when you cut the livestock step out and eat plants directly, it takes a lot less of the plants to support you. 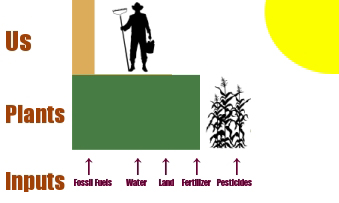 The nut-lovers at The PB & J Campaign have crunched the numbers:

We've already had one pro-peanut president, and you know how that turned out. Jimmy Carter had that crazy fixation with energy independence, slapping solar panels on the White House roof and flaunting his woolly cardigan agenda.

In fact, the peanut has long been the preferred legume of liberals, going back to the mid-19th century when African American scientist George Washington Carver made it the foundation of his sustainable agriculture agenda for the South. Carver, a brilliant botanist, came up with something like a hundred different products made from peanuts, "including cosmetics, dyes, paints, plastics, gasoline, and nitroglycerin."

Another one of Carver's goals, according to Wikipedia, was to undermine "through the fame of his achievements and many talents, the widespread stereotype of the time that the black race was intellectually inferior to the white race."

So now, once again, a smart, ambitious black man is promoting peanuts. Is Obama part of a plant-based plot to conserve land and water and feed people more efficiently instead of pigging out on animal products at the expense of the entire universe? Has he secretly taken the PB & J pledge? When he talks about uniting red states and blue, is it some kind of coded reference to grape-jelly purple?

Look for the folks at Fox to get to the bottom of this--they may not know about eating low on the food chain, but they do know how to go low.