The southeast Asian nation of Brunei, a would-be member of the TPP, is under fire from Hollywood and human right activists for adopting a brutal penal code based on Sharia law with punishments including flogging, dismemberment and death by stoning for crimes such as adultery and sodomy.

Ellen DeGenneres, Jay Leno and other Hollywood celebrities have joined the Human Rights Campaign, the Feminist Majority Foundation and the city of Beverly Hills in blasting Brunei and calling for a boycott of properties owned by the government of Brunei, including the Beverly Hills Hotel. Virgin Airlines founder Richard Branson announced his companies will boycott all hotels owned by Brunei worldwide. These government-owned investments provide financial support to the medieval brutality in Brunei.

Speaking at a protest in front of the Beverly Hills Hotel on Monday, actress Frances Fisher called for "contacting the Obama administration and Members of Congress and urging them to ban Brunei from the pending Trans-Pacific Partnership trade agreement. The TPP is a dangerous pact in its own right."

The very day Brunei was phasing in Sharia law, Obama's chief trade negotiator Michael Froman was on Capitol Hill selling the TransPacific Partnership, which would bind the U.S. to Brunei and give the Islamic Sultanate special economic privileges.

If the Obama administration gets its way, Brunei could bypass U.S. courts and go before an international tribunal to sue for lost profits from the boycott being pushed by the city of Beverly Hills, Hollywood celebrities and human rights advocates.

"The fact that President Obama seeks the TransPacific Partnership to reward Brunei, which has institutionalized the torture to death and violent punishment of gay men, lesbians and women in general, represents a new low in the administration's abandonment of America's traditional role in upholding human rights," says feminist, author and activist Naomi Wolf.

"The TransPacific Partnership is a terrifying development for Americans because it forces us to live under decisions that we have no say about whatsoever, and takes legislation and legal rulings out of the hands of Americans and puts them in the hands of international courts beyond the reach of the will of the people," Wolf says.

The TransPacific Partnership is a sweeping pact with twelve nations that would tie the U.S. more closely to Brunei and give the Brunei government special investment privileges in the United States.

While human rights groups, religious freedom advocates, LGBT and women's rights groups protest a regime that supports the public flogging of women who have abortions, the jailing of women who become pregnant outside of marriage, the stoning to death of gay men and lesbians and the outlawing of Bibles and Christian missionaries, the Obama administration seems to be seeking deeper ties with the Islamic Sultanate of Brunei.

The barbarism in Brunei shows us everything that's wrong with the TransPacific Partnership. We should not give special privileges to countries that spit on basic American values. The Obama administration should be standing up for American values and human rights, not the Sultan of Brunei.

It's boggles the mind that the administration wants to give economic rewards to bad actors in eastern Asia at the same time it wants economic sanctions on bad actors in Eastern Europe. 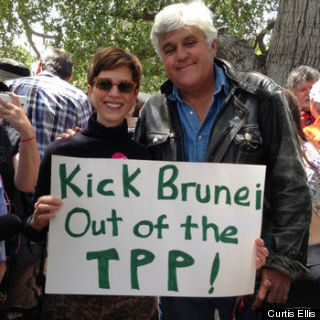