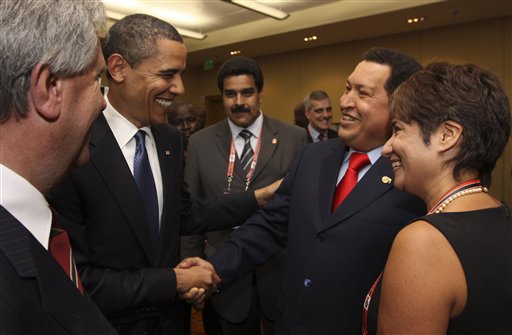 Nothing. Absolutely nothing. Let me repeat that one more time for our Chicken Little Republican friends. There is nothing wrong with this picture. And more importanly, the sky is not falling.

It's the handshake heard 'round the world. The infamous image of a smiling President Barack Obama greeting Venezuelan President Hugo Chavez last week at the Summit of the Americas in Trinidad and Tobago. The handshake that sent conservatives into hissyfit high-gear.

Republican Sen. John Ensign (NV) said Sunday that it was "irresponsible" for Obama to be seen "laughing and joking" with the Venezuelan president. And former House Speaker Newt Gingrich said "This does look a lot like Jimmy Carter. Carter tried weakness and the world got tougher and tougher because the predators, the aggressors, the anti-Americans, the dictators, when they sense weakness, they all start pushing ahead."

In dismissing this irresponsible rhetoric Obama pointed to his victory in November which signaled that Americans wanted change; change from eight years of the Bush administration's reckless foreign policy. He said voters elected him to enjoin both friends and enemies alike into the peace process.

In discounting the "weakness" claims, Obama said "The American people didn't buy it. And there's a good reason the American people didn't buy it, because it doesn't make sense....It's unlikely that as a consequence of me shaking hands or having a polite conversation with Mr. Chavez that we are endangering the strategic interest of the United States."

You see, Republicans don't understand diplomacy. Engagement. Negotiation. The political mastery behind Teddy Roosevelt's "Speak softly but carry a big stick" brilliance. To the contrary, they subscribe to the Speak like an obnoxious bully, carry a big stick, and beat everyone over the head with it philosophy. They simply don't get the strategy behind thinking before you speak, measuring your moves, not tipping your hat. They don't know what it means to talk smart rather than talk tough. That's because they're used to a petulant, testosterone-deprived, arrogant, simpleton cowboy-wannabe who lived in a black and white world, pissed off friends and enemies alike, and alientated us from the entire world.

Sure, why don't we just insult everyone. Lump them all into this Axis or that Axis. Cut off talks. Threaten. Refuse to meet. Re-adopt the wildly successful You're either with us or against us philosophy of diplomacy. Let's keep invading countries and be at war with everyone. Fuck the world and fuck Peace on Earth. Fuck Iran, fuck North Korea, Venezuela, Cuba and everyone else. Fuck everybody. We're the goddamn United States, baby. George Bush taught us that. We don't need anyone. Who the hell is this Obama guy thinking we should actually act like statesmen and strive towards a new and lasting peace. What a pussy.....