President Obama will soon have to decide whether he will be the "all of the above" president or the "respond to climate change" president. 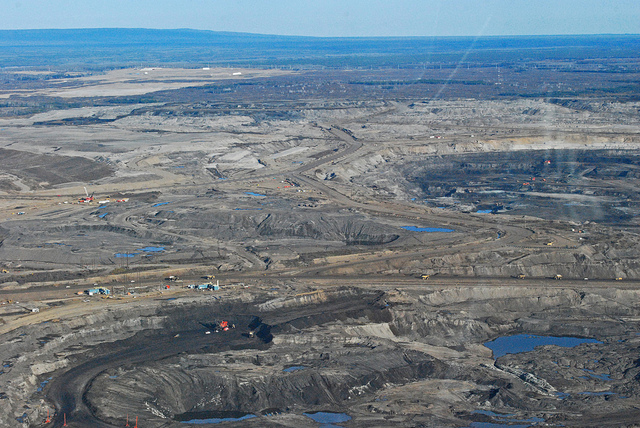 Mining tar sands to generate oil* is already decimating Canadian landscapes. Now the U.S. is weighing whether to approve a pipeline that would allow this fuel to flow to Gulf Coast refineries along a path that could imperil important Midwest water sources. On top of all that is what the project would mean for the climate. Photo by: NWFblogs on Flickr.

In Pursuit of Hydrocarbons

Last year on the campaign stump, Obama presented himself as the "all of the above" guy on energy. Here's an example from a speech delivered at Prince George's Community College in Maryland:

The operative words are "every source." Sure, he touts and has funded the development of green energy, but he has also favored a ramp-up in production of domestic hydrocarbons -- specifically oil and natural gas. At any number of occasions last year Obama trotted out the fact that under his watch domestic drilling and production were up, imports were down. Similar boasts appear on WhiteHouse.gov as well:

While energy was a campaign issue, it was obvious (painfully so for many) that climate change was not. No major policy speeches by either candidate and not a single question in the debates.

But after the election climate change reentered the president's ambit. First came his acceptance speech on election night:

"We want our children to live in an America ... that isn't threatened by the destructive power of a warming planet."

Then came an inaugural address that got the environmental community all atwitter -- climate change receiving more attention than any other single issue? Could it be that Obama was positioning himself to go after climate change in a big way?

You Can't Have 'All of the Above' and Address Climate Change

But here's the problem: an "all of the above" energy policy that encourages the development and production of oil and gas flies in the face of a "climate change" pledge to "respond to the threat of climate change, knowing that the failure to do so would betray our children and future generations."

And the stakes are too high to ignore. Greenhouse gas emissions and atmospheric greenhouse gases are at an all-time high. Nine of the 10 warmest years on record have occurred since 2001. And there is increasing concern that we may be seeing an uptick in extreme weather events as a result of global warming.

Responding to climate change requires that production and use of hydrocarbon fuels be ramped down, not up.

So sooner or later the Obama administration will face a moment of truth -- a choice between following an "all of the above" path or responding to "the threat of climate change." And that moment could be just down the road.

The Keystone XL project would put into place a pipeline system that would allow oil imports to flow from the Canadian tar sands to refineries on the Gulf Coast. (For more, see my post here, this New York Times explainer, and this Washington Post Keystone XL interactive graphic.)

It's been a rallying cry for both the "drill, baby drill" crowd and the environmentally minded, albeit from different positions. For the pro-drillers the pipeline is a no-brainer -- a job-creating project that will bring a new, unconventional, (almost) domestic source of oil to American refineries.

For many environmentalists, stopping the pipeline is also a no-brainer -- it's a landscape-decimating proposition whose oil is among the most carbon-intensive out there. (More here, here and here.)

There's also the issue of the pipeline itself. The initial plan had routed it through highly sensitive lands in Nebraska's Sand Hills, which sit above the all-important Ogallala aquifer -- a critical source of drinking water and irrigation for a huge swath of the United States. The potential risk to the aquifer was so grave that Dave Heineman, the Republican governor of Nebraska, urged Obama to deny TransCanada (the pipeline company) the greenlight for the project.

And finally there is the climate concern. While there is still some debate about how the size of the Alberta resource -- and how much carbon dioxide would be released if it were completely exploited (see here and here) -- there is little argument that on a BTU-to-BTU basis, tar sands oil is about as dirty and carbon-intensive as it comes. And so sure, if you're an "all of the above" president, you might approve the pipeline. But if you're a "respond to climate" one? I don't think so.

The Keystone XL project has had its ups and downs, its starts and stops. (See timeline.) Because the pipeline would cross an international border, the project must be reviewed by the State Department and approved by the president. In January 2012, the State Department rejected TransCanada's application because of concerns about environmental impacts but invited the company to re-apply with a new route that would avoid environmentally sensitive areas.

TransCanada has now submitted a new proposal whose newly proffered path for the pipeline avoids some -- but not all -- of the ecologically sensitive areas in Nebraska and its surrounds: It still passes over the Ogallala but avoids the Sand Hills.

Gov. Heineman has approved the new plan, with the Nebraska Department of Environmental Quality finding that the pipeline's construction and operation along the new route would result in "minimal environmental impacts" and that any oil released "should be localized and Keystone would be responsible for any cleanup."

So now it's up to Obama and his administration.

The State Department is said to be studying the new plan and a decision is expected this spring. So what will they do? Just-confirmed Secretary of State John Kerry was cagey and non-committal on the subject during his confirmation hearings last week, promising only to make "appropriate decisions." (Hey, at least he didn't say he would decide for it then against it.)

Ultimately, though, the decision is in the hands of President Obama. That decision will be revealing indeed.

* Oil sands produce bitumen, a thick tarry hydrocarbon that is either "upgraded" into a synthetic blend or diluted so it flows like oil.