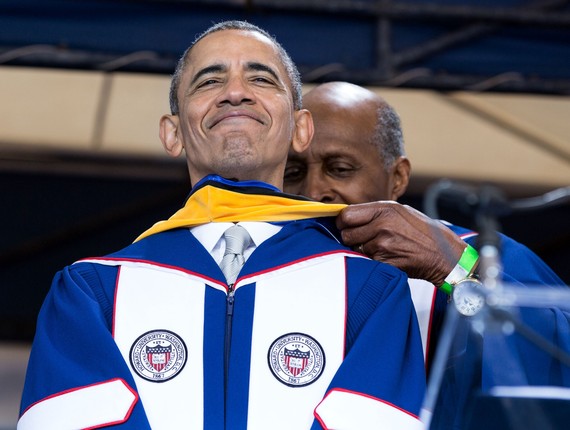 President Obama's speech at Howard University earlier this month was both inspiring and practical -- in fact, his underlying point was that those two things are deeply intertwined. "You have to go through life with more than just passion for change; you need a strategy," he said.

It's an idea well known to political actors like Abraham Lincoln and George Orwell. They fought injustice and to improve the lives of those who had the least, but they knew that the practical path was the truly moral one. Doing what leads to progress -- even if it's messy and incomplete -- is far better than doing what feels ideologically satisfying.

Combining stirring rhetoric and smart strategy is not just for questions of war and freedom. Part of the President's message is you can't just act when there is a big, inspiring issue, you need to work to improve the world even in more mundane (but important) ways. Don't just vote for a president, for instance, but also for "city councilman, or a school board member, or a sheriff."

That leads me to an issue Congress will be debating next week. Most people probably don't even know their representatives are considering reforming our chemical safety laws, or that our current system is badly broken. They assume the government tests chemicals in our products before they can be sold in stores, but that's not true.

Even if it doesn't always make the front page, helping protect children and families from potentially hazardous chemicals that can cause cancer, Parkinson's, and developmental delays is a pretty important thing.

To get it done required both activism -- decades of grassroots action to get states and stores to wake up to the dangers -- and negotiations. Actually, it has taken nearly three years of talks between progressive Democrats and conservative Republicans, and their respective allies in the environmental movement and the chemical industry.

Why should people who are trying to do the right thing - to help protect children from dangerous chemicals - negotiate with the chemical industry? Because, as the President said, "change requires more than just speaking out...it requires listening to those with whom you disagree, and being prepared to compromise." To put it in the most practical terms, you can't pass a bill in Congress these days unless you get votes from people with whom you normally disagree.

The emerging chemical safety bill is a dramatic improvement over the current system. It got that way because the industry was under tremendous pressure from activists, retailers, and states. It will require, for the first time, a review of new chemicals before they hit store shelves, special protection for vulnerable populations, and other critical safety policies.

But, like all major legislation before it, it will be a compromise. Why should we accept anything less than a perfect outcome? As the President said:

"Democracy requires compromise, even when you are 100 percent right. This is hard to explain sometimes. You can be completely right, and you still are going to have to engage folks who disagree with you. If you think that the only way forward is to be as uncompromising as possible, you will feel good about yourself, you will enjoy a certain moral purity, but you're not going to get what you want."

He wasn't, of course, referring to the chemical safety bill - or even the Affordable Care Act, which required the same negotiations with industry. But his point was clear: improving lives through government is an imperfect but absolutely necessary process.

Democracy inherently involves compromise. But when you do it right, you can make things better for millions of people. And as the President said, "I'll take better every time."