When Caroline Kennedy endorsed Barack Obama in 2008 as her father's rightful heir, she laid upon him the mantle of Camelot and the enduring mystique of John F. Kennedy, who, according to polls, continues to be America's most beloved president. Comparisons between the 35th and 44th presidents have been inevitable, but while there are striking similarities between the two men, there are also distinguishing differences.

Both rose to the nation's highest office as junior U.S. senators with scant legislative achievements to their credit. The man from Massachusetts served three terms in the House of Representatives before he won his Senate seat in 1952 and began campaigning for national office, running for vice president in 1956 and for president in 1960. Obama, a state legislator in Illinois for seven years, began his run for the White House shortly after being elected to the Senate. Both men broke the barriers of bigotry to reach the highest office in the land, Kennedy as the first Roman Catholic, and Obama as the first African American.

Erudite Ivy Leaguers, each seemed blessed with the gift of prose. Kennedy wrote three books and won a Pulitzer Prize for Profiles in Courage; Obama made millions writing his bestselling memoir, Dreams From My Father. As a Boston scion and Harvard graduate, JFK always smarted from having been rejected for a seat on the Harvard Board of Overseers; Obama left Harvard with the distinction of having been the first person of color to be elected president of the Harvard Law Review. 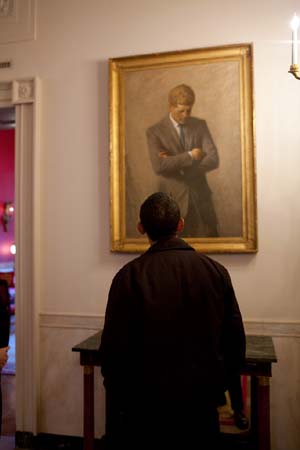 Both men possessed extraordinary talents for oratory and inspired their generations with the poetry of hope -- "the thing with feathers that perches in the soul," as Emily Dickinson described it. Their messages resonated with a nation that had grown restless after eight years of a Republican administration. Each man came to the presidency with his party in control of Congress, and each used that power to effect sweeping change. Kennedy introduced the most comprehensive and far-reaching civil rights bill, though it was not passed on his watch but became law under his successor. In 2010 Obama signed the Patient Protection and Affordable Care Act, which reformed health care to provide insurance for all Americans. Kennedy ordered federal departments and agencies to end discrimination against women in appointments and promotions; Obama signed the Lilly Ledbetter Fair Pay Act to ensure fair pay for women in the workplace. In addition, he succeeded in getting a measure passed to end discrimination against gays in the military.

Both Kennedy and Obama exuded a dash of glamor in their roles as commander-in-chief and became the darlings of Hollywood. As president, each brought to the White House a fashionable and accomplished First Lady, two adorable young children and scene-stealing pets. Yet as beloved as each became, both men stirred ferocious passions and dangerous threats from extremists who accused them of treason.

As notable as their similarities are, there are important differences that define and separate them. Kennedy grew up with immense wealth and the high expectations and powerful connections of his father, the former ambassador to the Court of St James and the 14th richest man in America in 1960, worth more than $400 million. Obama, a fatherless child, forged his way on the wings of a single working mother, who wandered the world and left her son to the loving care of her parents. As a young man he borrowed thousands of dollars to finance his education and was not able to repay his student loans until he was 43 years old.

Both elusive men, Kennedy and Obama cared mightily about their public image, not an insignificant concern for politicians. Kennedy, who worried about being portrayed as a rich man's dilettante son, would not allow photographs inside Air Force One, saying that it would look like a playboy's luxury. Obama made sure cameras never caught him smoking cigarettes. Each understood the mesmerizing power of appearances and knew, as the actor Melvyn Douglas says in the film Hud, that "little by little the look of the country changes just by looking at the men we admire."

Both presidents tangled with corporate America and drew the ire of big business. In 1962 Kennedy blasted the steel industry, saying their price increase was "unjustifiable and irresponsible." Obama, a community organizer, championed the middle class, challenging Wall Street when he enacted financial regulatory reform, and demanded that the richest Americans pay their full share of taxes.

Each had to find his way through military quagmires left by their predecessors. Kennedy was haunted by the Bay of Pigs invasion but carried the country through the Cuban Missile Crisis. He later increased the number of U.S. military advisers to South Vietnam to more than 16,000. Obama came to the White House determined to end the Iraq War, which he did by December 2011. After sending 33,000 more U.S. soldiers to Afghanistan as part of a strategy to downsize the American commitment there, he vowed to end that war by 2014.

Politically, both men made judicious choices in their running mates, but Kennedy never gave Lyndon Baines Johnson the full partnership that Obama accorded to Joe Biden.

Kennedy left behind the Peace Corps, the Nuclear Test Ban Treaty and the promise of a man on the moon within the decade. Obama's legacy must be left to the historians of tomorrow, but at the dawn of his second term, following an inauguration that coincided with the fiftieth anniversary of President Kennedy's last year in office, it is reassuring to believe that each man dedicated his presidency to setting the country on a course for true north.