President Obama and Tumblr founder David Karp recently chatted about education in America at the White House. In this interview, Obama said: "A college education is the surest path into the middle class." But what you didn't learn from Obama's talk is that while 84 percent of 17- and 18-year-old foster youth report wanting to go to college, less than 3 percent actually go because most don't graduate from high school. Due to their lack of education and economic opportunity, 66 percent of foster youth end up homeless, dead, or in jail by 19 years old -- unfathomable, right? 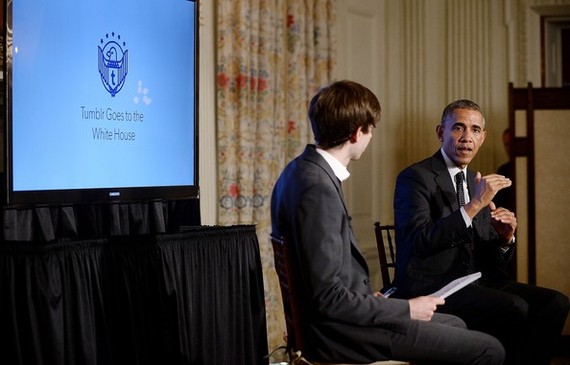 We have known for years about the corrupt United States prison-industrial complex and the billions of dollars of annual taxpayer money spent on corrections. We know that half of the prisoners incarcerated today were prosecuted for committing minor drug offenses and that African Americans are disproportionately represented among this prison population.

But here's some "real-talk": 80 percent of the prison population was once in foster care, which is absolutely disconcerting, unconscionable and odious! Many community leaders and activists are hard at work to reform the prison system, but they should be using their adroit tongues to advocate for child welfare system reform, too! If we improve the foster care system, we will reduce the number of people in prison.

Earlier this year, Northeastern University hosted Orange Is The New Black author Piper Kerman. I listened to Kerman discuss her short stint behind bars, dispel the audience's many misconceptions of prison life, and explain the reasons why she detested the use of solitary confinement (Note: A day later, I watched Kerman testify before Senate on the need to change the Bureau of Prison's morbid practices).

Netflix's adapted version of Kerman's Orange Is The New Black is an exaggerated effort to highlight the inequities of the U.S. prison system that uses numerous real-life, didactic lessons for added verisimilitude. The success of her book and show has given Kerman a platform to highlight the injustices of our prison system -- specifically, the foster-care-to-prison pipeline.

Tastyee -- a character in the show -- was in foster care. Tastyee learns quickly; she can read, write, and calculate complex math in her head. In addition, she has business savvy and is extremely articulate. However, when she was aging out of foster care, Tastyee was recruited to sell drugs by a master manipulator (Vee) because she had nowhere to go and needed a job. In order to survive, she succumbed to a life of drug dealing that has led her to recidivate. While a caricature, this depiction is the reality for many foster youth; they go from the foster care system to the prison system because they don't have positive support systems and caring parents.

Most people don't know this fact: According to the parens patriae doctrine, the state and federal governments become the parents to the children they remove from their natural families due to abuse and neglect. This means that governments and politicians are the parents to every single foster kid.

At the National Youth Aging Out Summit, University of Pennsylvania Dean Richard Gelles -- one of the most cited researchers in the field of foster care -- recounted a conversation that he had with Philadelphia Mayor Michael Nutter after a system failure that lead to a negative outcome for a foster child. Gelles recalled Nutter saying, "If that happened to my child, I'd kick someone's ass." Gelles told Nutter: "The bad news is that was your child." He went on to explain the responsibility that all elected officials have when it comes to children in their care.

Where is the hero that swoops in and saves foster children from the politicians who neglect their fiduciary duties to ensure that foster kids attain an education? Evidently, state and federal governments (and politicians!) are failing foster kids. Someone should be yelling and screaming, but we don't often hear about the foster-care-to-prison pipeline.

If they are not going to be held responsible and accountable for the life outcomes of children in their care, governments and politicians -- technically their parents -- should advocate for financing prison education to keep their babies from becoming career criminals.

In 2013, RAND Corporation -- a conservative think tank -- conducted the largest-ever (meta-) analysis of correctional educational studies. This study, Evaluating the Effectiveness of Correctional Education, found on average that "inmates who participated in correctional education programs had 43 percent lower odds of recidivating than inmates who did not." The cost analysis performed in the study also showed that the education programs were cost effective; "a one dollar investment in prison education translates into reducing incarceration costs by four to five dollars during the first three years after release, when those leaving prison are most likely to return." Clearly, helping former prisoners get back on their feet can save taxpayer dollars by lowering the direct and collateral costs of incarceration.

The New York Times recently highlighted positive education initiatives created by John Jay and Bard Colleges that allows inmates to receive college credits that can count towards finishing a degree while still in prison. Boston University also developed the Prison Education program that works with inmates from MCI Norfolk and Framingham. Since their inception, "350 students earned bachelor's degrees, 39 received master's degrees, and 23 were granted both bachelors and master's degrees." These efforts should be applauded, but taxpayers' dollars must support preventative efforts that keep foster youth on the road to the middle class and redirects them from the route of crime.

With the birth of a new social venture funding method, Social Impact Bonds (SIBs), I hope governments and politicians use this mechanism to scale up proven "pay-it-forward" education models that empower foster kids to beat the odds, instead of banking on taxpayer dollars to pay for backend interventions intended to make up for their failure to ensure foster youth thrive.

I commend President Obama's administration because they're investing in innovations intended to improve the foster care system and championing educational efforts in low-income communities where foster kids live via their Promise Neighborhood Initiative.

FosterEd -- a National Youth Law Center initiative -- is piloting a program in California to improve educational outcomes of children and youth in foster care because less than 50 percent of foster kids nationally secure a high school diploma or GED. By ensuring every single foster youth is supported by an educational champion and strengthened by an education team, FosterEd is cultivating a holistic educational support system that intends on creating more success stories: Raquel Banks, who experienced foster care, is matriculating this fall with a full scholarship to the University of Pennsylvania.

Roberta Nunez -- a successful foster youth -- said, "Education is the foundation for success for foster youth, and without it, there is NO hope..."