There is a basic economic perspective in Obama and Paul Volcker when they speak about the crisis and what we need to do. It is still somewhat inexplicable to me how Obama could chose Larry Summers and Timothy Geithner as his two top "economic" czars, they of the House of Rubin.

As head of the NY Fed, Geithner could have been far more on top of matters. For instance, he could have done some investigating into the rapid growth of the shadow banking system which is about 70% of global finance. It was the Financial Times that did some of the best investigating, not the Fed! (SeeFinancial Times on the City of London; see also generally Jeff Madrick in the current New York Review of Books; and, on Larry Summers, I just heard Madrick on NPR New York's Leonard Lopate's program, say that Summers is trying to catch up with the new views that Obama seeks to develop, but will be "behind the fact" as he is so deeply rooted in Rubinomics.)

The shadow banking system is not informal, illegal, or clandestine. Not at all: it is in the open, but it has thrived on the opaqueness of the investment instruments, partly facilitated by their complexity. Eventually this meant that nobody knew exactly or could understand the composition of their investments, not even those who sold the instruments. 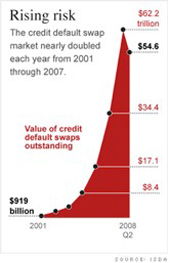 One key component of the shadow baking system are credit-default swaps. This graph shows the extremely sharp growth over an extremely short period of time. While much attention has gone to subprime mortgages as causes of the financial crisis, the 60 trillion in swaps in mid-2008 is what really got the financial crisis going. The high rate of foreclosures alerted investors that something was not right, and hence a growing demand to cash in the swaps. The banking and financial system did not have those 60 trillion. This is more than global GDP.

There is no way that Geithner could not have noticed this sharp growth in only 5 years. He could have investigated this, even as a research project. Geithner was also part of the bailout which opted for pouring what is a lot of tax payers money into the financial system. How could our taxpayers' billions solve the 60 trillion root cause of the crisis. (See my earlier post on this "A Bad Idea: A Financial Solution to the Financial Crisis.")

In what ways are these swaps part of the shadow banking system?
This shadow banking system has thrived on the recoding of instruments, which, at the limit, allowed illegal practices to thrive. For instance, it is now clear that credit-default swaps are a type of insurance, but rather than selling them as such they were sold as derivatives. Why? Because if they were sold as insurance the law requires they be backed by capital reserves and be subject to considerable regulation. Making them into derivatives was a de facto deregulation and eliminated the capital reserves requirement. Credit-default swaps could not have grown so fast and reached such extreme values if they had been sold as insurance, which would have been the lawful way. None of the financial firms had the capital reserves they would have needed to back 60 trillion in insurance. Because they were recoded as derivatives, they could have an almost vertical growth curve beginning as recently as 2001.

This is a moment for radical departures form the old ways. We need to definancialize the economy: for instance, before the current "crisis" the value of financial assets in the US had reached 450% to GDP (McKinley Report 2008). We all need debt, whether we are a firm, a household, or a country. But do we need this level of debt? No. We need to expand and strengthen regulated banking and make finance less invasive and aggressive. And we need to grow jobs. That is why I put my hopes in Obama's intelligence and common sense and in Volcker's complex and multifaceted economic perspective rather than merely a narrow financial perspective. But I still wish Joseph Stiglitz was part of the team. (On the political aspects of all of this see the 09 issue of Dissent magazine).