Americans expect Obama to accomplish less in the next two years, but his ratings are rising anyway. And historical precedents points to a close race in 2016. This is HuffPollster for Friday, January 23, 2015.

WHAT RISING OBAMA APPROVAL MEANS FOR 2016? - Nate Cohn: "After a difficult year, President Obama is enjoying a modest rebound ahead of State of the Union address Tuesday....It is a relatively small increase, but it is more impressive in the context of the unusual stability of Mr. Obama’s approval rating, which hovered between 42 and 44 percent for 15 consecutive months. In 2016, the president’s approval ratings should be a telling indicator of whether the country is likely to support another Democratic administration....The balance of evidence suggests that the break-even point for the presidential party’s odds of victory is at or nearly 50 percent approval. If the only thing you knew about the 2016 election was Mr. Obama’s approval rating on Election Day, you might guess that the Democrats had a 37 percent chance of holding the White House with a 46 percent rating — rather than a 23 percent chance with a 41 percent rating. The difference between 41 and 46 might be worth between one and two percentage points to the Democratic candidate in 2016 — the difference between a close race and a modest but clear Republican victory." [NYT] 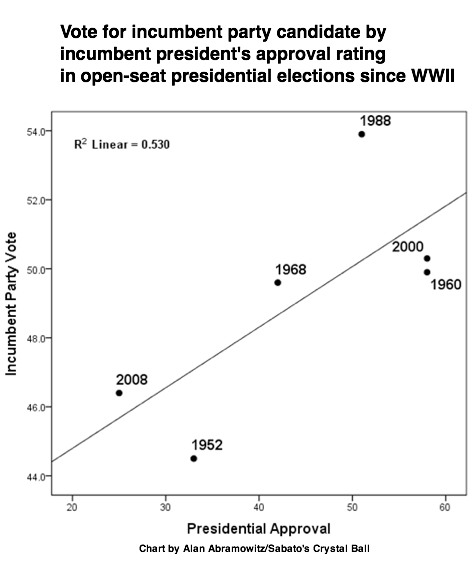 AMERICANS EXPECT LITTLE CHANGE IN OBAMA'S LAST TWO YEARS
Kathy Frankovic: "Americans in the latest Economist/YouGov Poll, conducted in the days before the President provided his assessment of what the country needs, don’t expect President Obama to be much different in his last two years in office than he was in his first six. In fact, if anything, the country predicts things could get worse. A plurality expects the President to accomplish less than he did in his first six years, and that includes one in four Democrats. Democrats are only slightly more likely to think he will accomplish more than that he will accomplish less." [YouGov] 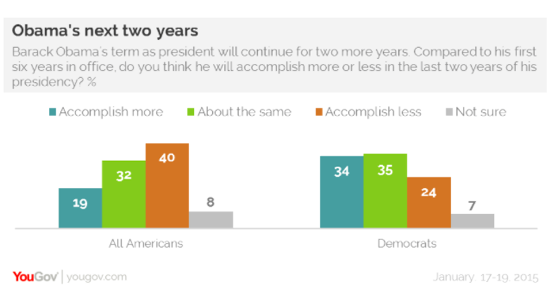 ROPER ARCHIVES: UNDERSTANDING THE HOLOCAUST - Kathleen Weldon: Seventy years ago next week, the Soviet army liberated prisoners at the Auschwitz concentration camp. How much did Americans at the time understand about the horrors that were unfolding in Europe, and how much do they know about the Holocaust today?...In the summer of 1944, the New York Times ran reports on the mass killing of Jewish people under the Nazis. In November of that year, 76% of Americans in a Gallup poll said they believed the stories that Germans had murdered many people in concentration camps. When respondents were asked to estimate the number of people who had been killed in these camps, however, it was clear that the extent of the atrocity was not yet understood...Despite the enormity of the Holocaust, and the many books, movies, museums and memorials aimed at ensuring remembrance, Americans in more recent years have shown surprising ignorance of what happened under the Nazis. A 1985 Time/Yankelovich, Skelly & White found that only 69% of respondents could say what the Holocaust was in their own words. When Americans were asked by the American Jewish Committee/Taylor Nelson Sofres in 2005 how many Jews died in the Holocaust, just 33% were able to select the correct number." [HuffPost]

-Just 32 percent of Americans are satisfied with the the amount they pay in federal taxes. [Gallup]

-Aaron Blake ponders the meaning of Republicans who say they're less like to vote for Clinton because of her gender. [WashPost]

HUFFPOLLSTER: What Does Obama's Approval Rating Mean For 2016?
Politicians On Pot