Americans give President Obama a ratings boost for the holidays -- and we're giving all the Christmas polling you could want. This is HuffPollster for Wednesday, December 24, 2014.

END OF YEAR BUMP IN VIEWS OF ECONOMY, OBAMA - Kevin Liptak: "Improving views of the economy have helped hike President Barack Obama's approval rating to a 20-month high, a new CNN/ORC poll showed Tuesday, as markets climbed to record levels at news of an economy in overdrive. More Americans still disapprove of the job Obama is doing as President. But at 48%, Obama's approval rating is at its highest point in CNN polling since May 2013. The gains were driven by newfound backing among women, independents and millennials — groups where Obama's approval numbers jumped 10 percentage points from a month ago….Tuesday's CNN/ORC poll showed for the first time in seven years, a majority of Americans — 51% — have a positive view of the economy, a sharp increase from the 38% who felt that way in October. The jump was present in every demographic group — men, women, whites, non-whites, urban, rural — and was largest among Americans who earn less than $50,000 annually." [CNN, full results] 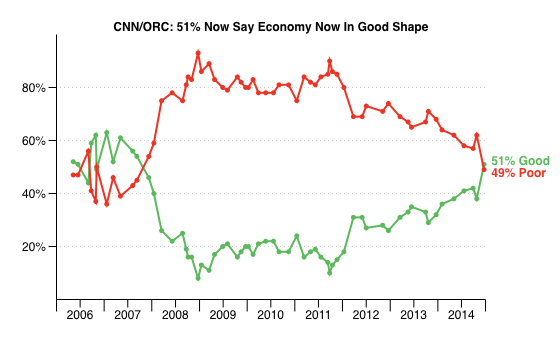 Not just CNN - Monthly averages of the Rasmussen Reports and Economist/YouGov tracking polls also show increases from October to December. The weekly average that Gallup publishes jumped from 43 percent for the first two weeks of December to 45 percent for the week of December 15-21, Obama's best score on that measure since May. [Gallup]

The default trendline of the HuffPost Pollster chart for Obama's approval rating, which can sometimes be slow to reflect movement, does not yet show improvement. However, the "less smoothing" version shows an uptick from a low of 42.0 percent in late October to 44.5 percent as of this writing. [Obama approval chart default view and with less smoothing] 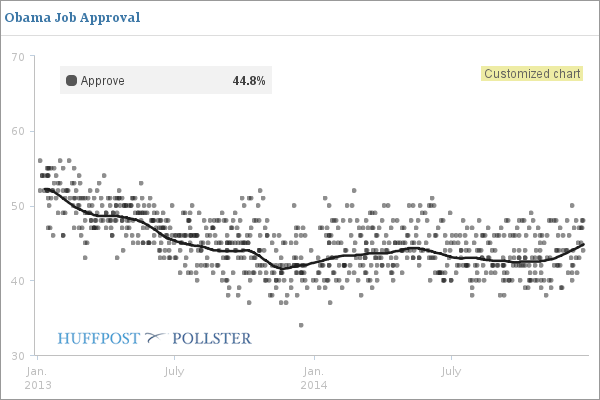 Obama's ratings should improve with strengthening economy...slowly - Brendan Nyhan: "The lesson of history is that Mr. Obama will get credit if growth continues, but we should not be surprised if public opinion lags objective measures of the economy. The political scientists Peter Enns and Gregory McAvoy write, for instance: 'For the most part, public opinion does not react instantaneously to changes in economic information. It takes time for economic news to make its way from government reports into news reports so that ordinary citizens can absorb and respond to this information.' [NYT]

A LOOK AT THE POLLING ON OPINIONS OF POLLS - Kathleen Weldon: "Pundits have few kind words for politicians who consult public opinion polls when formulating policy. On the other hand, pollsters themselves consider polls no less than the voice of the people. But where does the public stand? A review of polls about polling, from the Roper Center for Public Opinion Research archive: The first poll about polling, by the Office of Public Opinion Research, was conducted in 1944. Among the 57 percent who had heard of a 'public opinion poll,' 75 percent thought they were a good thing for the country. Just 2 percent thought they were bad, and 21 percent had no opinion. This pattern of response remained fairly stable over many decades….Despite this positive overall appraisal of the role of public opinion surveys, the public remains shows significant skepticism toward polling….Whether the public has faith in polling results or not, one thing is clear: they don't understand how polling works….When asked in a 2005 Gallup poll if a random sample of 1,000 US adults accurately reflected the views of the nation's population, just 30% thought it did; 68% believed it did not. And a 2001 Kaiser Family Foundation poll asked how important the difference was between a poll of randomly-selected telephone numbers and a poll of people who called an 800 number advertised on TV. Only 37% considered this difference in methodology to be very important and 31% somewhat important." [HuffPost]

HOW THE GRINCH POLLED CHRISTMAS THIS YEAR:

-The Upshot checks in on what gifts people are searching for. [NYT]

-49 percent of Americans agree stores and businesses should greet their customers with “happy holidays” or “season’s greetings” instead of “merry Christmas” out of respect for people of different faiths; 43 percent disagree. [PRRI]

-PRRI checks in on the War on Christmas. [PRRI]

-Pew Research looks back at how holiday celebrations have changed. [Pew]

-Heather Krause finds Americans love the holidays, even though they spend them doing things they hate. [538]

-Most Americans say holiday gifts for children's teachers are nice but not necessary. [HuffPost]

-Most Americans believe the Christmas story is historically accurate. Pew]

-Holiday lights are so bright you can see them from space. [Flowing Data]

HuffPollster will be taking a brief break for the holidays. We'll see you again on Monday, January 5. Merry Christmas and a happy New Year!

-Most Americans say the developed world has a duty to help poorer countries deal with climate change. [YouGov]