President Obama's approval rating has dropped to 43% from its one-time high of 69% in January 2009, but the president still holds majority favor among one group: Muslim Americans.

According to a recent Gallup poll conducted in the first six months of 2014, 72 percent of U.S. Muslims approve of the job President Obama is doing. This is the highest approval rating among religious groups by a huge margin, with the next highest at 59 percent of "other non-Christians." 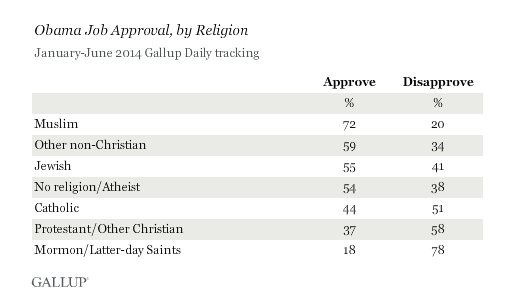 Mormons expressed the lowest support for President Obama's work with just an 18 percent approval rating and a whopping 78 percent disapproval. The president's approval rating has decreased across religious groups by 5-7 percentage points in the first half of 2014 compared to the 2009-14 period. Muslims have consistently been the most approving of Obama's job, however, and Mormons the least approving. 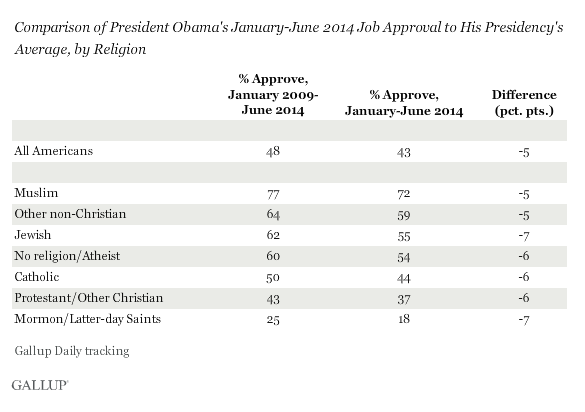 Muslims, Jews, atheists and "other non-Christians" demonstrate higher support for Obama than Christians do, on average -- a trend that played out in the 2012 election, as well. 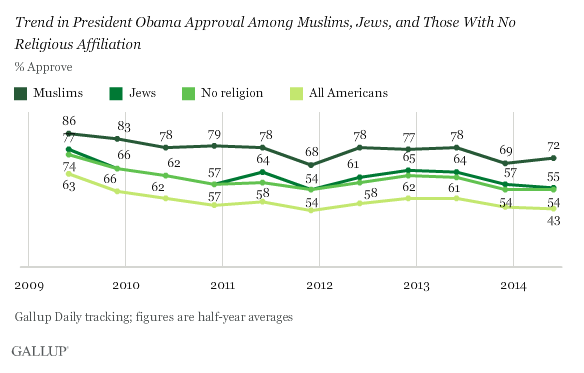 According to a poll conducted by the Council on American-Islamic Relations (CAIR), 85% of American Muslims voted for Obama in the 2012 election -- down just 4 percentage points from the 2008 election. This record support for Obama demonstrates a decades-long shift toward the Democratic party among Muslim Americans, a large percentage of whom voted for George H.W. Bush in 1992 and George W. Bush in 2000.