WASHINGTON -- While the killing of al Qaeda mastermind Osama bin Laden lacks true historical precedent, polling following similar events suggests that President Barack Obama will enjoy a bounce in public approval ratings in the days and weeks ahead. However, this boost will likely yield to perceptions of Obama's handling of the economy and the wars in Iraq and Afghanistan as more time passes.

First, until last night, Americans had largely given up hope that bin Laden would ever be captured. In the immediate aftermath of the Sept. 11 attacks, 78 percent of Americans responding to a Gallup/USA Today/CNN poll agreed that bin Laden would likely be captured or killed; only 21 said his capture was unlikely. But by September of last year, a CNN/Opinion Research Corporation survey asking the same question found that only 30 percent considered bin Laden's capture likely, while 67 percent considered it unlikely.

Second, Americans have repeatedly expressed overwhelming support for the course of action that Obama and his national security team pursued. Republican pollster Alex Lundry tells The Huffington Post that a survey his firm conducted this past January showed that 80 percent of Americans favored capturing or killing Osama bin Laden, but only 16 percent said they thought it was likely to happen.

"Clearly," Lundry says, the news is "a welcome surprise for the American public." Most "had effectively ruled out the possibility of ever seeing this day, despite desperately yearning for it," he added.

Third, the immediate reaction among political leaders, pundits and even chatter on Twitter has been marked by unanimity rather than the usual partisan polarization. Some Republican leaders have downplayed President Obama's role in the shooting of bin Laden, but most have given him some credit. Even former Vice President Dick Cheney has offered congratulations to Obama and his national security team.

This sort of universal positive reaction is typical of the "rally around the flag" phenomenon long observed by scholars. Presidential approval ratings have historically surged in reaction to dramatic international events that directly involved the president and the U.S. armed forces. Sixty years of the Gallup Poll illustrate the way these events produce big spikes in approval.

But these surges in public favor also tend to recede within a few months:

The reaction to the arrest of Hussein in 2004 is particularly noteworthy, since it presents the closest parallel to the killing of bin Laden. The chart below shows the trends in all polls compiled by University of Wisconsin Professor Charles Franklin. His trend estimate shows that the capture of Hussein produced a bounce of roughly 5 percentage points in his summary trend line, which estimates the underlying trend represented by all polls (including the aforementioned Gallup numbers). The chart also shows that the increase in Bush's rating quickly dissipated. 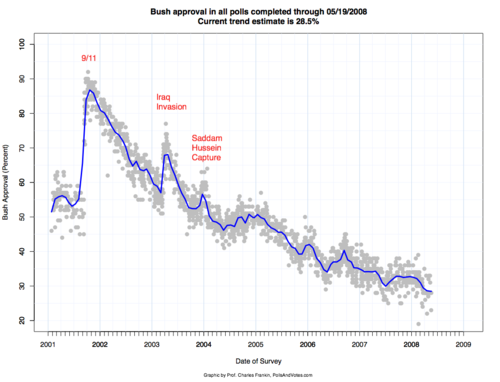 Franklin and Brendan Nyhan, a University of Michigan political scientist, agree that a similar or slightly greater bounce is likely for Obama. Nyhan says that "5-10 points seems possible, and maybe a bit more." But he warns that "bounces dissipate quickly, so the long-term significance is likely to be small."

Of course, approval ratings capture the public's response to a president's handling of a wide variety of issues and public events -- especially the condition of the economy -- so direct comparisons across individual events can be misleading. Indeed, the killing of bin Laden, a mass murderer and international terrorist, is a historic event without a clear parallel.

Nonetheless, an overall pattern is discernible: Americans rally to their president around national security crises and military successes, but their reactions are usually short-lived. Most polls currently put Obama's approval in the mid-40 percent range. In two weeks, that will likely be higher, but how long that boost will last is anyone's guess.