WASHINGTON -- President Barack Obama's job approval ratings have hit new lows over the past month, yet he continues to hold slight leads over Republican candidates in head-to-head polling. Of the two, the approval ratings are a slightly better measure of Obama's re-election prospects, signaling a very tough contest ahead. But history tells us to be wary of both as predictors of the 2012 outcome. It is still very early.

The president's approval rating has risen and fallen over the past year, with brief bumps up in January, following passage of a budget deal and the shooting of Rep. Gabrielle Giffords, and again in May, following the killing of Osama bin Laden. Since the debt ceiling debacle in August, however, the public's approval of Obama has dropped to new lows. Our trend estimate chart, based on all available public polls, gives him a rating of roughly 42 percent approval to 53 percent disapproval. 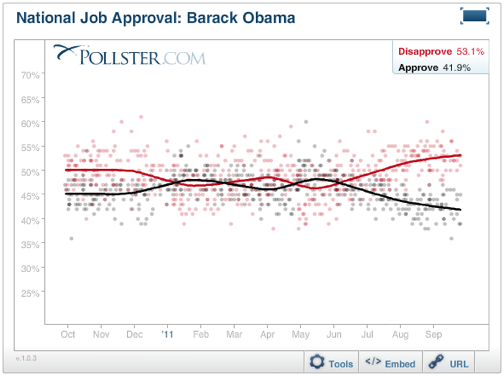 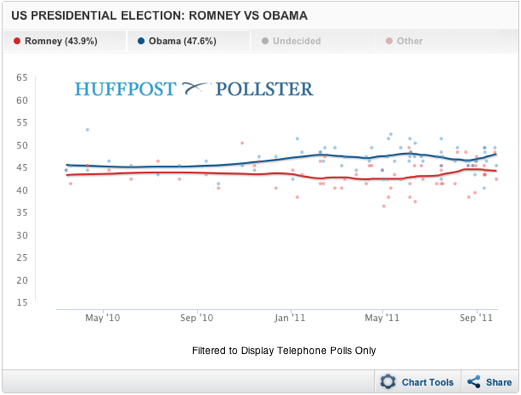 The contrast between the two sets of results has some asking which is a better indicator of Obama's re-election chances, the head-to-head polling or the individual approval ratings? The answer is that approval ratings are a better indicator for now, although neither polling measure provides a reliable prediction a year or more before the election.

Political scientists Chris Wlezien and Bob Erikson have examined the issue for "The Timeline of Presidential Election Campaigns," their forthcoming book on election forecasting, which is a subject they've studied for decades. A chart from their book (reproduced below with permission) shows that the predictive power of head-to-head "horse-race" polls increases gradually over the last 300 days of the campaign. These kinds of polls are highly predictive of the outcome in the final month before the election, but at 300 days out their predictive power is virtually zero. 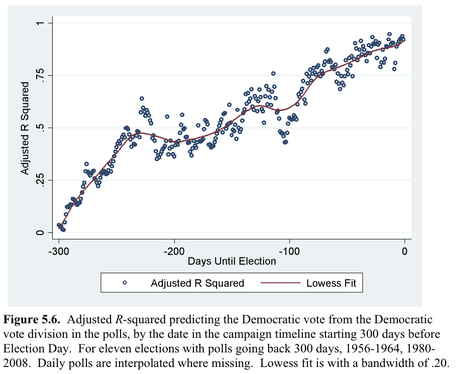 Election Day 2012 is still 402 days away, so as political scientist and occasional HuffPost blogger Brendan Nyhan put it a few weeks ago, "we shouldn't make too much of where Obama stands against his likely Republican opponents right now."

Further statistical analysis by Wlezien and Erikson shows that job approval ratings are slightly better predictors than horse-race polls until about 100 days before the election, but that the differences are small, and neither can predict the winner with much confidence a year or more out.

At the request of The Huffington Post, Wlezien and Erikson checked the data for presidential elections from 1948 to 2008. They found that, although job approval ratings at this point in the election cycle show some correlation with the ultimate vote for the candidate of the president's party, that correlation is slight (0.3 to 0.4) and not significantly different from zero.

What all this means is that none of these polling numbers can predict the winner of the presidency a year or more before the election. "Nothing much matters statistically at this early date, 13 or 14 months before the election," Erikson wrote via email. "Not approval, not trial heat polls, and not the economy."

The economy matters a great deal, of course, in driving Obama's current approval rating. It will also figure greatly in the choices that voters make in November 2012. "If we know that the economy will not improve even from today's low benchmark," Erikson added, "or that Obama will continue to flail, then we might start predicting a Republican win in 2012."

Obama will face a very difficult re-election campaign next year. That much is certain, but predictions of the outcome are premature. It's just too early.