Other polls have shown similar Obama leads in recent weeks, but some saw the Gallup shift as evidence of further damage to Romney from his now infamous comments on "the 47 percent" at a private fundraiser. Less noticed and perhaps more important is that Obama's September gains in voter preference match a modest but critical boost in his job approval ratings, as Gallup reported on Thursday.

Recent surveys have shown widespread awareness and mostly negative reactions to Romney's 47 percent remarks. As of this writing, the HuffPost Pollster tracking model, which draws on all national and state level polling, shows Obama's lead over Romney expanding by nearly a full percentage point since September 16, the day before news about Romney's comments first appeared.

But the same chart shows that Obama's lead in the national polling trend has been growing steadily during September. Since the end of the Republican convention on August 30, the chart shows Obama's lead growing from roughly one to just over four percentage points.

Perhaps more important, and separate from the 47 percent controversy, the rise in Obama's job approval rating registered just after the Democratic convention has persisted. As reported by Gallup, Obama's approval rating "has been 50% or higher in each of the last four Gallup Daily tracking figures," roughly comparable to the levels they measured following the Democratic convention. 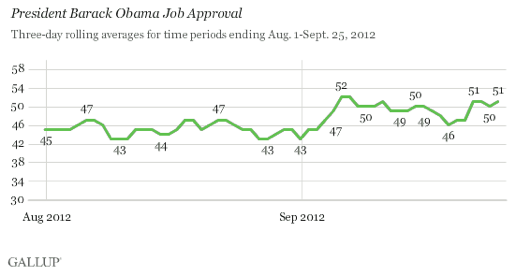 Gallup's Obama approval rating has increased roughly four percentage points, from an average of 45.7 percent on surveys fielded from July through early September, to 49.7 percent in their daily tracking results since the Democratic convention. But Gallup is far from alone in this finding. The pollsters that have tracked Obama approval in recent months have all shown it rising. The average increase has been roughly three percentage points. (Notably, the persistent "house effect" in Gallup's ratings, as compared to the mostly monthly surveys using comparable methodologies, is evident in August results but not in September). 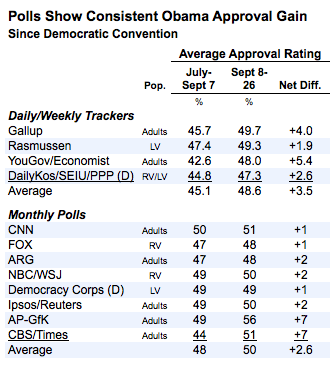 These results put Obama's current job approval rating at 49.4 percent when plotted on the HuffPost Pollster Obama job approval chart, which combines results from all national polls (and is set to show "less smoothing" to more accurately capture the September increase).

Most of these results, including those from Gallup, are from samples of all adults or registered voters nationwide, so they include the views of many Americans who will not vote in November. This wider sampling does come with two helpful characteristics: First, the snapshots of opinion before and after the party conventions should reflect the same populations, so any shifts can be attributed to changing perceptions of Obama's performance rather than shifts in the composition of "likely voters" due to a jump in Democratic enthusiasm.

Gallup also notes that Obama's numbers have varied in their recent tracking from 46 to 52 percent and that "three presidential debates scheduled and two more jobs reports coming out before Election Day" create "plenty of opportunity" for these ratings to shift down again.

That is certainly possible, but most of the short term "fluctuation" has been in Gallup's day-to-day results. Given the consistency in the increase across different polling firms and how slowly presidential approval tends to change over time, the change in September looks like more than just a fleeting polling "bump." The 47 percent controversy may have caused a brief uptick in Obama's lead against Romney, but the improvements since the party conventions appear to be based on more fundamental judgements.