WASHINGTON -- Eight media pollsters have fielded national opinion polls since Christmas, and all eight show a nominal increase in President Barack Obama's job approval rating since their prior surveys in either November, early December or both. While the shifts are often too small to attain statistical significance on any one survey, the consistency of the pattern across surveys indicates the modest change is most likely real. At the same time, the improvement is only enough to move Obama's approval back to the levels recorded last spring.

The table below shows the change in the approval percentage for eight different pollsters on surveys conducted since the November elections (but before last night's speech in Tucson). We have averaged the results of the daily or weekly tracking surveys (such as Gallup, Rasmussen or YouGov/Polimetrix). Again, while the magnitude of the recorded changes is small, the direction is always positive for Obama. 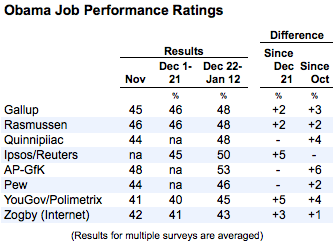 We plot these results on our standard interactive chart and draw regression-based trend lines to represent the approval and disapproval percentages. At the time of this writing, the approval percentage has increased by just over two percentage points, from a low of 45.1% in November to 47.5% now. Obama's approval rating fell below 47.5% in late May of 2010. 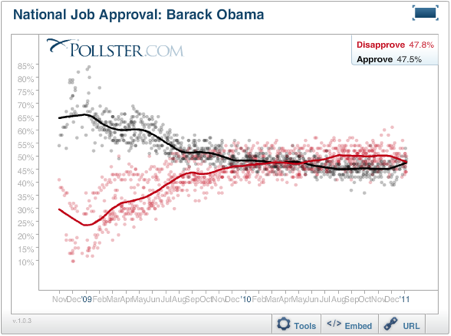 But keep this change in perspective, or at least, consider the way the Pew Research Center interpreted its own results. Although they show a nominal (2-percentage-point) increase in Obama's approval rating, as illustrated in their chart below, they conclude that "neither the trouncing of the Democratic Party in the midterm elections nor the surprising legislative accomplishments of the 'lame duck' Congress has had a measurable effect on opinions of Barack Obama." 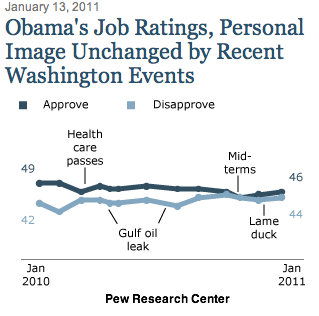 Strictly speaking, that's true. The change as measured by the Pew Research sample alone is too small to be statistically significant (i.e. "measurable"). But even if we look to other surveys and conclude that a two-point increase is real, it's also quite small, particularly if we back up and consider the perceptions held by most Americans over the past year. From that perspective, it's fair to say that Obama's personal and job approval ratings have "changed very little since the middle of last year."

An apparent upturn in economic confidence may explain the most recent uptick. Consider the following results from various surveys over the last week or so:

While these changes are also modest, they are also promising for the Obama administration. History shows that the perception of an improving economy is the key to a sustained increase in the president's job approval rating.