President Barack Obama's public standing has remained relatively steady over the last month, according to a Pew Research poll released Wednesday, although most Americans disapprove of how he handles privacy and civil liberties issues.

The Pew poll puts his approval rating at 49 percent, down from 51 percent in May, consistent with other recent polling. While a CNN poll found that Obama's approval had dropped 8 points since May, most surveys show the president's ratings remaining stable amid recent controversies over National Security Agency surveillance. In an average of polls taken last week, Obama's approval ratings dipped about 2 points.

HuffPost Pollster's chart, which combines all publicly available polling, puts Obama's average approval just below 47 percent, down from 48 percent in May and 51 percent at the beginning of 2013.

A 51 percent majority of Americans disapproved of Obama’s work on privacy and civil liberties, while just 42 percent approved. The subject was the most problematic for him of any tested by Pew, including immigration and the economy. A 56 percent majority, however, approved of his handling of terrorism.

Pew hasn't previously asked about Obama's record on civil liberties, but his rating on terrorism was well within the range of past Pew polls.

The split on the two subjects was especially marked among independent voters, 52 percent of whom approved of the president's work fighting terrorism, compared with just 28 percent who supported his defense of civil liberties. While a majority of Democrats approved Obama's handling of both issues, 80 percent approved of his work on terrorism, outstripping the 68 percent who thought he was doing a good job on privacy and civil liberty issues. Fewer than a third of Republicans approved of his work on either issue.

Overall, 36 percent said Obama's terrorism policies have made the country safer, compared with 22 percent who said they've made it less safe, and 38 percent who said he hadn't made a difference.

A HuffPost/YouGov poll last week also found that Americans give Obama much more credit for his handling of the fight against terrorism than they do for his protection of constitutional rights. A third said that he'd erred too much in the direction of defending the United States from terrorism, while 15 percent said he'd gone too far in defending civil liberties, and 30 percent that he'd struck about the right balance.

But Obama's popularity is seemingly tied more closely to the nation's economic climate, which continues to show signs of improvement.

"The share of Americans saying the economy is in excellent or good shape has doubled over the past year, from 11 to 23 percent, and is the highest measure since January 2008 ...Yet the public’s economic views look good only when compared with the dismal attitudes of the past five years," the Pew report says.

Americans' economic confidence is close to the highest it's been in years, according to Gallup, and a growing minority now says that current economic conditions are good.

Obama's ratings are also following a familiar trajectory: Both former Presidents Bill Clinton and George W. Bush saw their ratings decline over the initial year of their second terms. 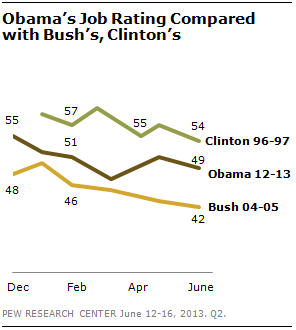