WASHINGTON -- On Thursday, the Gallup Daily tracking poll marked a symbolic milestone. For the first time in more than a month and only the third time since last July, Gallup reported an approval rating for President Barack Obama (49 percent) that was slightly higher than his disapproval rating (46 percent).

On Friday, the Rasmussen Reports automated tracking survey marked a similar landmark. It showed Obama's approval rating at 50 percent or greater nationwide for the fifth consecutive day, a popularity not matched on the Rasmussen poll since January 2011.

The two daily tracking surveys are not alone. National telephone polls released in the past week by Fox News, ABC News and the Washington Post, Ipsos/Reuters, and the Democratic Party-affiliated Public Policy Polling (also sponsored by the website DailyKos and the Service Employees International Union) have all found increases in Obama's approval rating since October. Most of the increases range between 4 and 6 percentage points; the Ipsos/Reuters survey found a smaller rise. 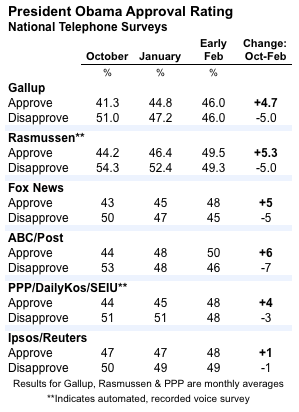 The improvement since the fall has also been evident in state polls, including such likely battlegrounds in the general presidential election as Ohio, New Hampshire, North Carolina and Virginia.

Given the recent upward blip in the two national daily-tracking polls, some have looked for explanations in the events of the past week, particularly last Friday's Labor Department report of a rising employment rate. While positive economic news is the most likely reason for Obama's improving job rating, the upward trend in his ratings did not begin in February. In fact, most of the surveys have tracked a gradual increase in Obama's ratings that began in late October.

The HuffPost Pollster chart, based on all available public polls, shows a slow, steady rise of roughly five percentage points in the president's job approval rating since it hit its all-time low in early October. 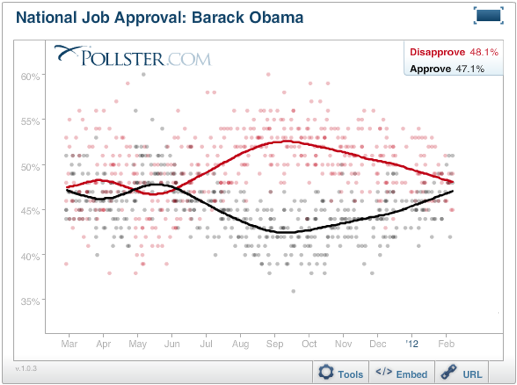 Of course, the overall economic mood remains gloomy. On the Gallup surveys, for example, far more Americans still say that economic conditions nationwide are getting worse (58 percent) than say they're getting better (36 percent) -- though the positive number has more than doubled, from 18 percent, since the fall.

The main point, however, is that the rising tide of consumer optimism directly parallels the upward trend in Obama's overall job approval rating. That result underscores the promise and the peril for the Obama administration in 2012. Continuing economic recovery will likely further boost his approval ratings and his chances in the November election. Yet we have seen temporary increases in consumer confidence before -- most memorably in January 2010 -- that quickly ebbed in the face of later negative economic news.

Either way, the economic trends of the next six to eight months are likely the most important factor in determining whether Barack Obama wins a second term in November.