A new Pew Research survey makes the steep drop in Obama approval reported CNN's poll look like even more of an outlier. The President gets a thumbs down on civil liberties...and from his own dial testing. This is the HuffPost Pollster update for Wednesday, June 19, 2013.

PEW RESEARCH: OBAMA APPROVAL 'STEADY' - A new Pew Research Center survey finds President Barack Obama's job approval rating remains "fairly steady" despite recent controversies: "Currently, 49% approve of the way Obama is handling his job as president while 43% disapprove. That is little changed from a month ago, before the NSA surveillance controversy and the revelations that the IRS targeted conservative groups for extra scrutiny. In early May, 51% approved of Obama’s job performance while 43% disapproved. [Pew Research]

Pew attributes steadiness to improving economy - The share of Americans saying the economy is in excellent or good shape has doubled over the past year, from 11% to 23%, and is the highest measure since January 2008. Looking ahead, more say the economy will be better (33%) than worse (19%) a year from now. That is a reversal of economic expectations since March, when more said economic conditions would be worse (32%) than better (25%) in a year. Obama’s ratings on the economy, while mixed, also have improved. Currently, 44% approve of his handling of the economy while 50% disapprove. That is among Obama’s highest net approval ratings on the economy since his first year in office. [ibid]

Obama gets high marks on terrorism, not on privacy - HuffPost: "A 51 percent majority of Americans disapproved of Obama’s work on privacy and civil liberties, while just 42 percent approved. The subject was the most problematic for him of any tested by Pew, including immigration and the economy. A 56 percent majority, however, approved of his handling of terrorism. Pew hasn't previously asked about Obama's record on civil liberties, but his rating on terrorism was well within the range of past Pew polls. The split on the two subjects was especially marked among independent voters, 52 percent of whom approved of the president's work fighting terrorism, compared with just 28 percent who supported his defense of civil liberties. While a majority of Democrats approved Obama's handling of both issues, 80 percent approved of his work on terrorism, outstripping the 68 percent who thought he was doing a good job on privacy and civil liberty issues. Fewer than a third of Republicans approved of his work on either issue.” [HuffPost]

Approval trend similar to other polls, very different from CNN - The 2-point decline in Obama's overall approval percentage since May on the Pew poll is much smaller than the 8-point drop reported by the CNN/ORC poll this week, but nearly parallel to declines of 1 to 2 percentage points seen at least four other recent tracking polls (as we reported on Monday). The Pollster chart, which uses all available public polls to estimate the approval rating trend, now shows a roughly one and a half point drop, from 48.0 to 46.6 percent since May 1. [Pollster Update, Pollster chart]

Why report just one poll? - The Guardian's Harry Enten notes the singular focus on the outlier result: "At CNN, one would be hard-pressed to find any mention of another poll. Instead, readers just have 'political analyst' Gloria Borger declaring that Obama needs to execute a twist on the 'Green Lantern' political play to get the public back on side...CNN, of course, is simply doing what all news organizations do when they sponsor a poll: they want to sell their 'exclusive' findings for all they're worth. That's not much of an excuse, though: political analysts on the network should be telling the people how it is, using all the datapoints available, not solely citing the company's own poll.” [Guardian]

Democratic pollster Mark Mellman adds more - "None of the coverage of [the CNN] poll that I’ve seen even mentions the differing results in other surveys. Would any reporter simply ignore conflicting sources on other stories? If a news organization produces results out of sync with those of other reputable pollsters, it seems to me they bear some responsibility to put their own numbers in context. Plummeting approval is a better story, it just may not be an accurate one -- and doesn’t accuracy rank pretty high in the pantheon of journalistic values?” [The Hill]

OBAMA'S APPROVAL IS DOWN SINCE JANUARY - Virtually all polls show a significant drop in Obama's approval rating since a post-election/pre-inauguration honeymoon late last year. Pew Research shows a six percentage point decline, from 55 to 49 percent, since January. That change is very close to the roughly five percentage point drop on the Pollster chart, from a peak of 51.5 percent in late December to 46.6 percent as of this writing. A chart in the Pew Research report helps put that change into context, noting that President's Bill Clinton and George W. Bush experienced very similar declines over the early months of their respective second terms. All three Presidents faced unique and genuine challenges that hurt their ratings, but nonetheless, the trends are nearly identical. 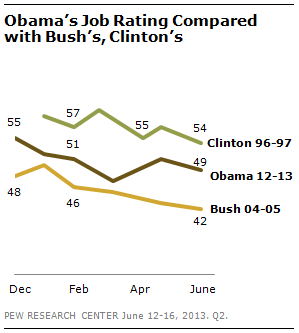 Does it matter? - Yes, says GWU Political Scientist John Sides: "The decline matters for three reasons. First, it matters for the 2014 election. A simple model of House election outcomes constructed by political scientist Gary Jacobson shows that the share of seats controlled by the president’s party depends in part on presidential approval...Second, it matters for the 2016 election. Of course, that’s a long way away, and a lot can happen between now and then. But again, simple forecasting models show that, controlling for other factors, the incumbent party does better when the incumbent president is popular....Third, it matters for whether the President gets what he wants from Congress—with some caveats...Of course, approval is just one factor among many. And it may be less relevant now in this era of highly polarized parties." [The Monkey Cage]

ANOTHER NSA POLL...IN CONTEXT - The Washington Post reports on the latest Post/ABC findings in the context of other polling: "Among all Americans, most -- 58 percent -- support the NSA’s program collecting extensive phone call records and Internet data...Public opinion polls -- asking questions in different ways -- have found varying levels of support for the NSA’s surveillance programs, perhaps reflecting growing awareness since they were first revealed early in June in The Washington Post and Britain’s Guardian newspaper. For instance, a CNN/ORC poll released Monday found 66 percent said the Obama administration was ‘right’ in tracking (mostly) foreign Internet activity, while only 48 percent “approved” of broader phone and Internet data collection in a similarly timed Pew Research Center/USA Today poll. The ranging results reflect both the differing question wording, but also the complexity and novelty of the programs to which Americans are just now paying attention.” [WaPost, see also May 12 Pollster Update]

OBAMA CITES 'DIAL TESTING' IN CLIMATE CHANGE CALCULUS - The Washington Post's Juliet Eilperin reports on comments made by President Barack Obama at two California fundraisers that reveal how political considerations affect his major initiatives on the environment: "In public comments at the beginning of the first session, Obama made it clear that he considered climate change 'one of the most important decisions we make as a nation,' according to a transcript released by the White House. But during the second event, according to several people familiar with his private remarks at the home of clean-tech entrepreneur Vinod Khosla, Obama expressed concerns about the political pain involved, saying that 'dial testing' of his State of the Union speech showed that the favorability ratings 'plummeted' when he vowed to act on climate change if Congress refused to do so." [Washington Post]

-Andrei Scheinkman and his team get some well-deserved kudos from Kaiser Fung. [Junk Charts]

-Stanislav Nikolov and Devavrat Shah are working on ways to algorithmically detect when something big happens on Twitter. [Snokolov via [Flowing Data[(http://flowingdata.com/2013/06/19/twitter-trend-detection-algorithm/)]