I was a supporter of Barack Obama, but have not always felt he was focused or exercised the tough leadership a president has to provide to get the job done.

So, during his State of the Union address, I wondered and worried what he would say. Would he go the diplomatic route, nervous about the recent electoral losses to his party and convinced the public was against his programs and policies? Would he try to play the middle ground, admitting responsibility for the logjam in Washington and hope that his affability would bring folks together? Or would he recognize that the "politics of hope" was just that and to actually accomplish anything you have to stand for something? 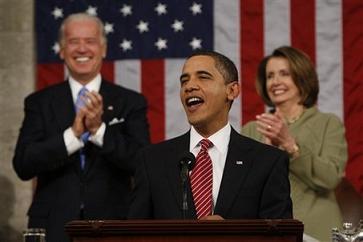 Other than the 70-minute length of the speech, I felt Obama did all right. Not a stirring FDR type of address, but a solid B Plus. A bit slow at first as he dealt with what everyone expected, the economy and putting people back to work. But it was necessary and the people needed to hear he was on top of what was most adversely affecting them.

But what pleased me mostly about the speech, which has now been dissected ad nauseam by almost everyone, is how prescient he was about one point almost at the end. He urged the TV pundits not to talk just to stir things up into neat controversial sound bites, instead suggesting we constructively figure out how to come together to get the nation going again.

But what did the pundits do? Well, to almost a man and woman, in particular CNN's Gloria Borger, David Gergen and Campbell Brown, there were observations that, to me, didn't make much sense. They, and others all around the TV dial, on NBC, CBS, ABC, Fox News and MSNBC, continually noted that Obama's health care reform comments came half an hour into the speech. This was proof positive that health care reform was dead or severely damaged to the extent that if anything at all was accomplished it would be nothing like Obama had wanted.

The simple fact is that Obama mentioned health care reform. And forcefully. It was in the middle of the speech, which means that he had gotten everyone's attention with his determination to alleviate their job distress and then, bang, he got their notice with the subject so many of these news prognosticators were convinced he was backing away from. I didn't hear any reverse course, and I admit I didn't hear specifics of how the politics will work. But that was smart, because everyone knows there are House and Senate bills already passed and people are working behind the scenes to get the House to pass the Senate bill. A law may well be enacted, a good start, and the Republicans will not be able to do anything about it.

Obama will have ample time to get improvements to it and to get the nation up to speed on how it will work before the senate and house races in the mid-term elections. More importantly, he will have accomplished something no president has been able to accomplish in the sixty years since Harry Truman tried.

I'd been concerned with all the talk about Democrats giving up hope because of Scott Brown's election in Massachusetts and the loss of their 60-vote super majority in the senate. It made no sense. The Democrats are still in charge for the better part of a year, and I believe the Massachusetts election was a reaction to the way Obama was conducting business -- in other words no business was being conducted.

So, I was excited when Obama reiterated his strong support of health care reform, that he was not going to let it die and dared the Republicans to come up with something better. I was thrilled when Obama reminded his own party members that they still had the largest majority in a long time and it was no time to "head for the hills." I was delighted when he criticized the Supreme Court, sitting just in front of him, for narrowly ending a century-old tradition of keeping corporate money out of our election process. And I was ecstatic when he said he wasn't a quitter, giving me some hope that he was going to be tough.

But the TV commentators only want to stir up trouble. Naturally, and it was expected, longtime GOP workhorse Mary Matalin expounded on how disappointed and offended she was with the speech, and actually used the word "unpresidential" to describe it. This, from a woman who worked on the staff of Vice President Dick Cheney. Sitting next to her and not even able to look at her while she spoke was her husband Democratic strategist James Carville, who not only strongly disagreed with his wife, but did so disdainfully and made me wonder how on earth they live together? Yes, husbands and wives don't have to agree all the time, but this is their business and life's blood. Exactly what do they talk about at home? It can't ever be politics or they'd kill each other.

Admittedly, Sanjay Gupta, chiming in with Anderson Cooper from Haiti, took issue with what some of them said and thought, as I did, that the president was in no way retreating from health care reform. He did mention that Obama referred to it as health insurance reform instead of the apparently more loaded health care reform moniker. And then that triggered some more banter from the media hogs flailing their arms to get Campbell Brown's attention.

Later, John King showed Wolf Blitzer Twitter "Tweets" from all over the country on his Magic Wall, and demonstrated in a selective view of states that most of the people were positively disposed to the speech. However, Blitzer ended the segment saying that the results were essentially dead even, indicating his inattentiveness or perhaps his desire to keep the tension alive.

Apparently these media types are there to keep themselves and their hefty paychecks forthcoming, egged on by the networks' need to create controversy. How else will they get the viewers to watch, and thus generate valuable ad revenue? The continual analysis and one-upmanship to try to find hidden meanings in the way Obama said something or how he said it or whether he smiled a certain way or angled his shoulder is a desperate attempt to get air time.

When we hear reportage about events we haven't witnessed, we are essentially captive to the accounts and hope what we're watching is accurate. When we are observers of a live occurrence we are more cognizant of how things are skewed. How often have you said, "Hey, that's not what I saw. What're you talking about?" And then we put our opinions on Facebook or post the video on YouTube. So, who are most of these experts? The teams presented tonight were mostly composed of people who have actually worked in government or in politics. But often the talk shows feature folks of no major standing who are marginally knowledgeable about a subject and are assigned presumed credibility because we've seen them time and again in front of the camera.

It's time to severely cut back on these diatribes. After all, we've just seen the same speech that they have. Are we any less significant than a focus group in Columbus? Are we too stupid to come to our own conclusions and make up our own minds? The sad thing is that the so-called reporting and analysis of voters opinions often themselves contribute to a change in the polls rather than the events themselves. That's not what I thought journalism was supposed to be about.