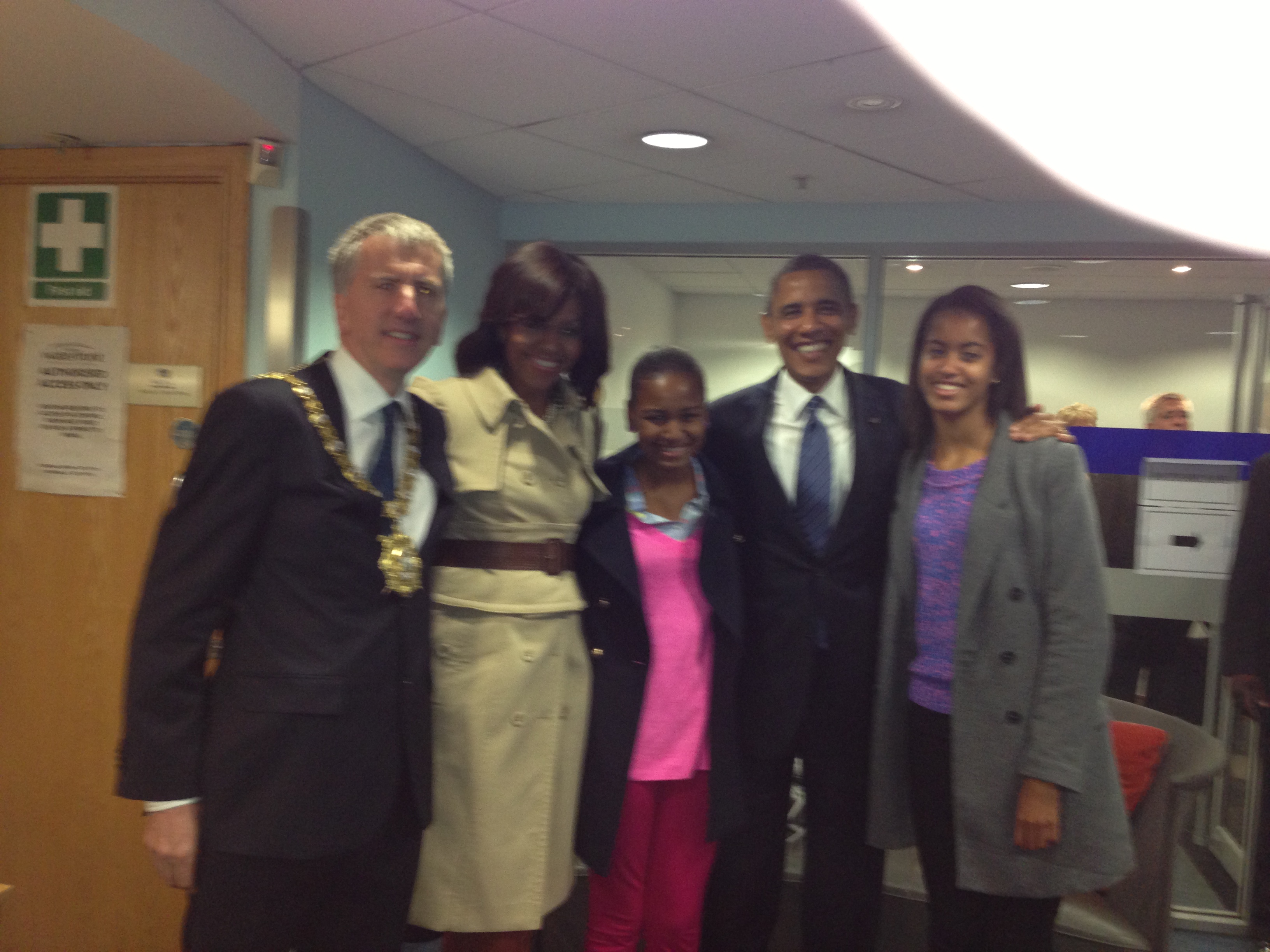 I had the unique honor of being able to welcome the Obamas to Belfast today with that traditional Irish greeting, "Aloha!" (It's okay, he also got the even more traditional "Céad Míle Fáilte," or One Hundred Thousand Welcomes!)

That set the tone for what was as much a joyous celebration of the peace Belfast enjoys as it was an opportunity for President Obama to reflect on a city transformed by the move from war-war to jaw-jaw.

Today, the Obamas saw a city transformed by two decades of peacemaking which only bore fruit because of the dogged determination of Irish America, the risk-taking of the Clinton White House and the diplomatic chops of Senator George Mitchell -- who brought sworn enemies together to sign the Good Friday Agreement of 1998. For me, this was a personal and a political landmark. At my first meeting of Belfast City Council in 1987, I was thrown out by the police after 10 minutes and back then I went to work each day in a flak jacket and was banned from the Mayor's parlor in which I now sit.

Today, Belfast is home to more American blue-chips than many U.S. cities. NYSE is here as is Citi, AllState, Bloomberg, Cybersource and Liberty Mutual.

But peace doesn't blossom untended. It needs the distribution of a peace dividend, most tangibly in the form of jobs. And that doesn't mean off-shoring American jobs but providing a European base for expanding U.S. companies who want a talented and well-educated workforce. And of course, it also opens up the U.S. for Irish entrepreneurs. Indeed, while U.S. companies employ over 120,000 across Ireland, it's less well-known that Irish companies employ about 100,000 people in the U.S. (mark me up for six of those jobs via the Irish-American newspaper I publish, the Irish Echo).

But for Belfast the American connection is about more than economics. Ties of blood, of culture and of community unite us with Irish Americans and Scots-Irish, whose ancestors, fleeing persecution and hunger in this country, crossed the "bowl of tears" to seek sanctuary.

Americans of all heritages are coming back. They are visiting Ireland in record numbers in this year of The Gathering, and more than ever they are putting Belfast on their itinerary to see the mammoth Titanic Belfast visitor center and to enjoy the popular Game of Thrones location tour.

And today President Obama, another returning Irish American, reaffirmed America's commitment to stand with the peacemakers of Belfast as long as we continue to push forward. The young people he addressed today will ensure we keep our side of that bargain.

We have a proverb in Irish "ar scáth a chéile a mhairimid" ("we all live in each other's shelter"). It's a useful adage for President Obama as he travels on from Belfast to the G8 summit to grapple with issues which have life or death ramifications across the globe.

Máirtín Ó Muilleoir is the Lord Mayor of Belfast. He is the Managing Director of the Belfast Media Group and the Publisher of the Irish Echo in New York. Follow him on Twitter @newbelfast