On Wednesday, conservative group Compass Colorado announced a new billboard campaign that they are launching around the state that links President Barack Obama to controversial Iranian President Mahmoud Ahmadinejad. The conservative organization says the billboards are meant to highlight Obama and "his allies'" opposition to American energy independence.

The 28 billboards that will be appearing around Colorado depict Obama, Ahmadinejad and one of three Democratic state reps--Ed Perlmutter (D-Golden), Sal Pace (D-Pueblo) and Joe Miklosi (D-Aurora)-- with the slogan, "Higher gas prices. Yes! U.S. Energy Independence. No!", according to Compass Colorado's website.

"President Obama and Ed Perlmutter have spend their long political careers opposing American made energy," Compass Colorado president Tyler Q. Houlton said about the intent of the billboards in a press release. "By opposing the Keystone Pipeline and domestic drilling, Obama and Perlmutter have directly contributed to higher gas prices across the country."

Compass Colorado says that the billboards should start appearing in Grand Junction and the Denver-metro area beginning next week.

LOOK: Image of the Perlmutter, Obama, Ahmadinejad billboard, take a look at the others at CompassColorado.org 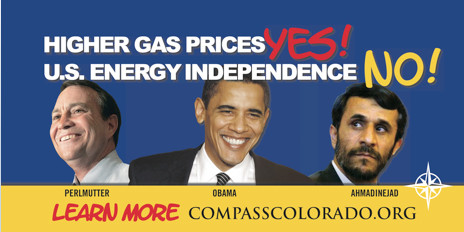