Is President Obama having a problem with African-American voters? Some pundits worry that he is, and at least one national poll has produced a worrisome number, but the large-sample national tracking surveys show that the level and intensity of Obama's overall approval rating among blacks remains largely undiminished.

Obama won the White House in 2008 with the help of record high support and turnout from African-American voters. While black voters have long voted overwhelmingly for Democrats -- national exit polls show the Democratic presidential candidate winning between 83 and 90 percent of the black vote between 1980 and 2004 -- Obama did even better, winning 95 percent in 2008.

Moreover, African Americans turned out in record numbers that year. The U.S. Census Current Population Survey found 64.7 percent of blacks said they voted in 2008, falling less than two percentage points shy of the turnout reported by whites (66.1 percent), and all but erasing a persistent voter turnout gap that had been evident in 2004 (7.2 percentage points), 2000 (5.0) and 1996 (7.7).

Can Obama's campaign win the same levels of black voter support and turnout in 2012, especially given a faltering economy and declines in his overall approval ratings?

Pollsters have a tough time tracking sentiment among relatively small population subgroups, like African Americans, that can yield less than 100 interviews on a typical national survey. So to minimize the random variation from small samples, it is best to look beyond single surveys and focus instead on larger collections of data.

The Gallup Daily tracking polls are one such source. Gallup interviews 500 Americans each day, allowing for combined weekly samples of roughly 3,500. Their weekly tracking broken out by race shows that Obama's approval rating has seen a small decline among blacks, from an average of 92 percent during 2009 to 86 percent so far in 2011. 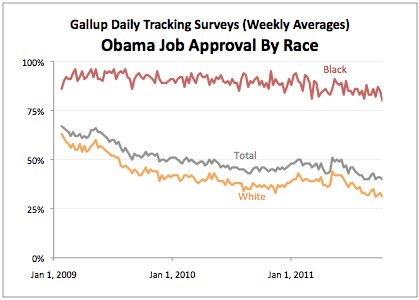 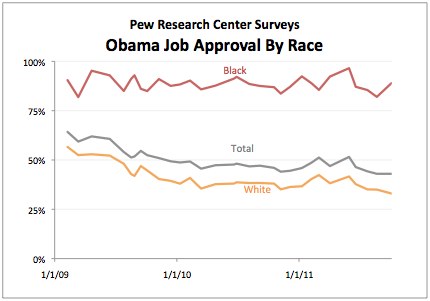 While approval rating is not the same as vote preference, the most recent Pew Research survey shows that Obama's high job ratings among blacks are matched by support in head-to-head trial heats comparable to the 95 percent support he gained against John McCain in 2008. Obama receives 95 percent of black registered voters on the Pew Research survey when matched against Republican candidate Mitt Romney, and 92 percent when matched against Republican candidate Rick Perry.

Obama's share of the black vote may be less of a concern to his campaign than the level of black voter enthusiasm. Whether black voters will turn out in 2012 at the same levels as 2008 is more difficult to resolve with survey questions. But a good place to start is questions that track intensity of feeling about Obama. How many strongly approve of his performance as president? How many report a strongly favorable impression?

Unfortunately, pollsters do not track and report intensity of feeling as often as overall job rating, but the Pew Research Center has tracked strong approval for Obama frequently since 2009. Their data show a significant drop in Obama's strong approval rating among blacks from 89 percent in April 2009 to 73 percent in January 2010, but since then it has remained in the mid-70s (although it dropped to 64 percent in August and jumped back up to 74 percent in late September). 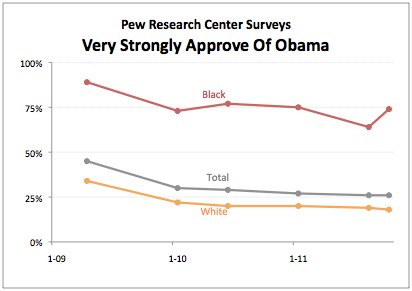 The Washington Post reported a different trend for Obama's favorability rating, which asks respondents for their general impressions of Obama rather than focus on the job he is doing as president. The Post's September survey, conducted with ABC News, found a 25-point drop since April (from 83 to 58 percent) in Obama's strongly favorable rating among African Americans.

Still, the apparent drop measured by the Post/ABC poll depends on the difference in that rating as measured by two individual surveys, which may be exaggerated by the usual gyrations of random sampling error. The more general, long-term pattern among black voters evident in the various tracking surveys is mostly stable.

Black voters may be "disappointed" about Obama's ability to change the political system, but they continue to express the same nearly monolithic support for him as they did in 2008. And more important, while cracks may be forming in expressions of enthusiasm, strong approval among blacks of Obama's performance has remained roughly constant over the last two years.