A mom-and-pop hardware store in Kentucky is reportedly selling the Obama Bop, an inflatable punching bag with the likeness of President Barack Obama on it. On the toy, the president appears as a boxer with a black eye.

Owner Kenneth Stout of Stout's Building Center in Mount Washington, Ky., insists that the 5-foot tall punching bag was set up as a joke, but Texas Democratic strategist Matt Angle dismissed it as a cheap ploy for attention.

Regardless, some customers were shocked by the store's political display.

"It is the office of the President of the United States. You have to show some respect," local resident Jen Pellerin told WAVE.

“Business people take a punch at him. People come in and hug him. It’s been both-sided," Stout told KTRH, adding that he doesn't feel the need to apologize. He said he didn't understand how people could get so worked up over a toy.

Stout told ABC Kentucky that he isn't selling a "Romney Bop" because they aren't made. Although it appears to have been discontinued, a "Battling Bush" inflatable punching bag was once available through online retailers.

The Obama Bop is also sold online, sometimes alongside other low-brow political novelties.

This isn't the first time that the toy has made news.

In July, an Obama Bop was removed from the front of the Republican Party tent at a fair in Muncie, Ind., after fairgoers -- including at least one Republican -- complained.

Tom Bennington, GOP spokesman for Delaware County, Ind., claimed that the gag was "meant in fun" by party leaders but said he personally found it "mildy offensive" for its portrayal of the commander in chief, according to CBS News.

While those responsible in both punching bag incidents have couched their display in humor, other effigies of the first black president of the United States have surfaced in the past -- with far more sinister overtones.

In June, Terry Jones, the controversial, Quran-burning pastor of the Dove World Outreach Center in Florida, hanged an effigy of President Obama outside his church and was subsequently questioned by the secret service.

In 2009, a Kentucky grand jury refused to indict two men who hanged an Obama effigy on the campus of the University of Kentucky. The men had been charged with burglary and disorderly conduct, the latter count associated with hanging the effigy.

The lawyer for the two men said that the disorderly conduct charge violated his clients' rights under the First Amendment. 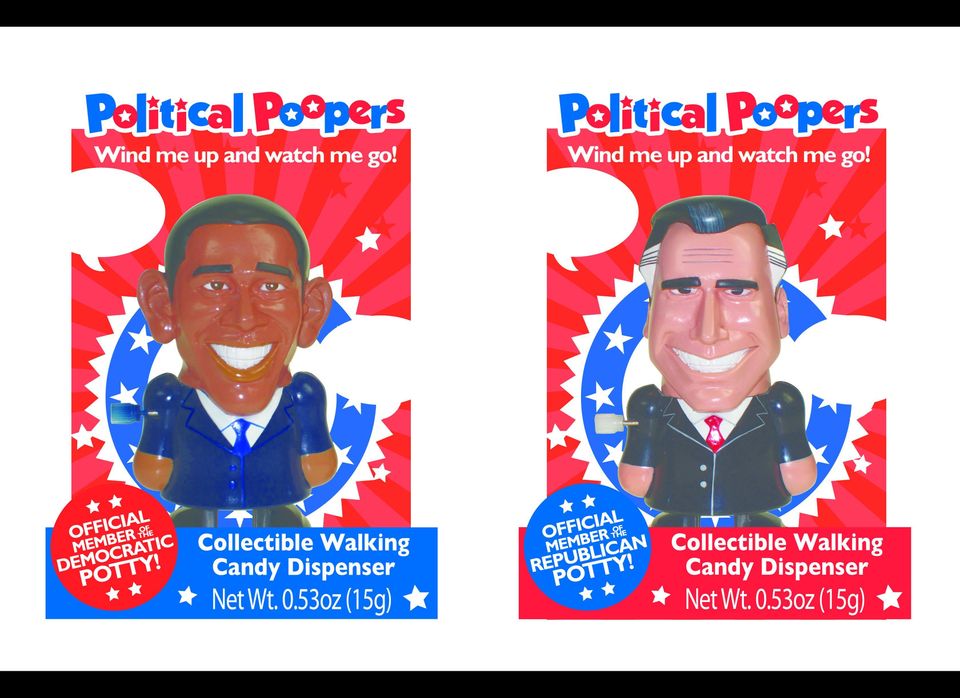 1 / 12
Political Poopers
These plastic wind-up toys of grinning Republican Candidate Mitt Romney and Presidential Incumbent Barack Obama come with red, white and blue candy treats. Pop open a secret hatch on the back of their head, fill with candy, wind them up and watch them leave a trail of candy poop wherever they waddle.
Political Poopers