In the 1980's, billionaire conservative gadfly Ross Perot received the prestigious Winston Churchill Award at a lavish Dallas dinner. Prince Charles himself came across the pond for the event, and local high society, Republican to a fault, rushed around town in the two weeks beforehand booking lessons on how to curtsy in front of royalty.

Never mind that America fought a war to escape British tyranny. The social set is big on ceremony, and this was as big as it gets.

Doocy is dim-witted, but reprehensible best describes Wesley Pruden, editor emeritus of the far-right Washington Times (owned by the religious Moonies.). He writes in his November 17 column that the president's predilection for bowing is because "he was sired by a Kenyan father" and "born to a mother attracted to men of the Third World," and thus "has no natural instinct or blood impulse" for what this nation represents.

Does he mean "sired" as in the breeding term for animals? Little doubt.

As we see from the images below, however, Eisenhower bowed before De Gaulle (a Frenchman, sacré bleu!), Nixon bowed before Emperor Hirohito (who'd ordered the bombing of Pearl Harbor), and George W. Bush actually kissed the Saudi Arabian King, something his former press secretary Dana Perino admitted to Wolf Blitzer on CNN was "the customary thing to do."

I'd say damn near making out with a foreign leader beats a ceremonial bow any day, wouldn't you?

Even Bob Dylan, arguably the world's most famous Jewish artist, knelt before a seated and throned Pope John Paul ll after performing in his Holy presence. The Bard was not expressing subservience to the Catholic faith and its leading acolyte.

Yet when Obama engages in these same kinds of traditional acts, right-wing heads explode. What blithering, racist fools these mortals be. 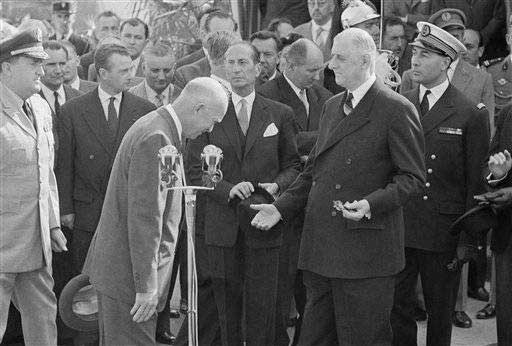 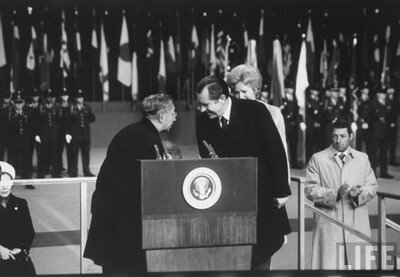 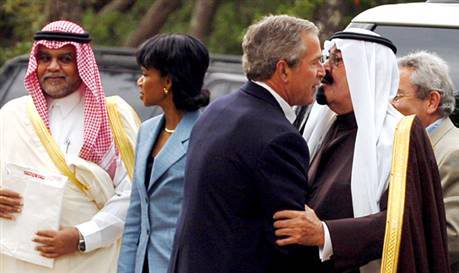 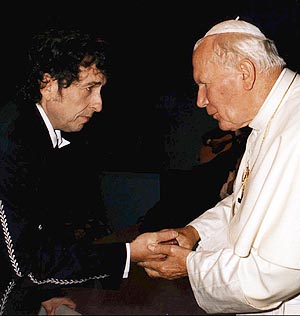