Wouldn't it be nice if President-elect Barack Obama slapped some solar panels and a herbaceous perennial on the roof of the White House? And while he's at it, how about some low flow toilets and sensor light and shading systems? As everybody already knows, we need to think beyond the "F---ing light bulbs." 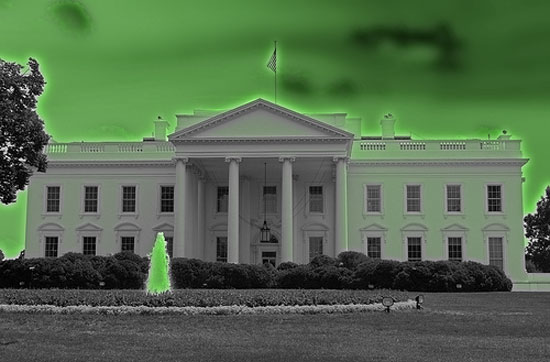 The good news is the American Institute of Architects plans to offer Obama some green advice for his new home. Advice that is badly needed: Unless you count the Green Room, and a few initiatives rolled out by President George W. Bush, there isn't much green going on in this leaky historic box, which, granted, is over 200 years old. And, just in the nature of its calling, the White House has a huge carbon footprint. After all, not many buildings get a complete revamp, like clockwork, every four to eight years.

Considering we are calling on other nations, such as China, to pay better attention to waste, energy efficieny, and green building, it's a bit embarrassing that 1600 Pennsylvania Avenue isn't our shining green star. The Germans, for example, have made huge strides with their government buildings. The Norman Foster-revamped Reichstag German parliament building -- is powered by water, wind, and solar energy, and, reportedly, will soon be the greenest parliament building in the world.

In Canada, all new government buildings are expected to meets the Canada Green Building Council's LEED standards. Our Energy Independence and Security Act of 2007 requiring Federal buildings to adopt Energy Star products or products designated under the Energy Department's Federal Energy Management Program (FEMP) in all general purpose lighting by the end of Fiscal Year 2013 is a start, but much more is needed.

Have some ideas for the White House? Comment below!

More From TreeHugger and Planet Green

German Parliament Building to be Greenest in the World
Be the Change... Obama Should Reinstall White House Solar Panels
Pop Quiz: The White House, A GREEN House?

More From Mairi Beautyman on Huffington Post
Five Ways to Green Your Yoga Workout
More Loving for American Expats, Plus Six Green Reasons to Vote Barack Obama
Four Ways for a Stylish and Tasty Green Dinner Party
From the Olympics to Sears, Wearing Recycled Bottles Goes Mainstream
Clothing Made from Milk and Bottles Made of Paper? The Eco Design Revolution
Terrorists or Heroes? Sea Shepherd Fights for Marine Life
Does Terrorism Make us Travel Greener?