Political science studies suggest that presidents rarely change opinions with speeches, but they can influence debate by shining a spotlight on a policy that is more popular, but not widely appreciated as such.

In other words, presidents are trend-amplifiers, helping to push through Congress widely accepted measures -- like rigorous gun background checks and immigration reform with a path to citizenship.

Since the election, Obama's job approval rating, which had hovered in the mid-to-high 40 percent range for much of his first term, has surged to roughly 55 percent on the HuffPost Pollster average of all available national public polls.

Perhaps more important, Obama's popularity soars above that of his Republican opposition in Congress. As reported most recently by the Washington Post/ABC News poll, Obama's 55 percent approval rating is more than double that of "Republicans in Congress," who are earning just 24 percent approval.

As a series of HuffPost/YouGov online polls conducted in recent weeks reveal, large majorities of Americans believe a president can make at least a minor difference on a wide variety of issues, from reducing poverty and expanding the middle class, to improving education and preventing another financial crisis. 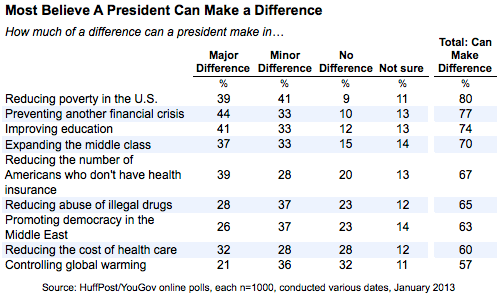 Yet while the contrast in approval ratings gives Obama "a clear upper hand over the deeply unpopular Congress," as ABC News put it, political scientists warn that little or no evidence exists to suggest that presidents can move public opinion on specific issues in their favor with speeches or other uses of the bully pulpit.

"Presidential speeches don't tend to persuade people on policy," wrote George Washington University professor John Sides. Sides cited the work of scholar George Edwards, who found that the "Great Communicator," President Ronald Reagan, failed to move opinion in his favor with nationally televised addresses on issues such as increased defense spending or aid to the Contra rebels in Nicaragua.

But Edwards didn't stop with Reagan. As Ezra Klein explained, Edwards "marshaled so much evidence" on the limits of the bully pulpit as used by presidents from Franklin Roosevelt to George W. Bush that his views have gained wide acceptance among other political scientists.

Still, Obama's team believe their experiences from the first term offer a formula to help break the legislative impasse on some issues. "Among the lessons we learned," a senior administration official told The Huffington Post, "is you can take an issue to the country and have some success, turn the dynamic around."

The official specifically cited last year's debate over extending low interest rates on subsidized student loans. In April, Obama took up the matter on the campaign trail, giving a series of speeches on college campuses. He even appeared on "Late Night With Jimmy Fallon," opening with a "slow jam the news" segment on the student loan issue.

Republicans initially resisted bringing the president's student loan proposal to a vote in the House. Under public pressure from Obama, however, GOP presidential nominee Mitt Romney endorsed his proposal and Republicans ultimately brought the measure up for a vote. It passed both houses of Congress in July.

The student loan example is consistent with the findings of Princeton political scientist Brandice Canes-Wrone, who examined televised presidential appeals on budget issues from 1957 to 2000. She found that presidents do "obtain significant legislative influence by promoting their proposals in nationally televised speeches," but in a limited context: Their successful appeals tended to be on proposals that were already popular but that were stalled legislatively or otherwise unlikely to pass without the president's public sales pitch.

Canes-Wrone demonstrated that on budget issues, at least, the critical value of the bully pulpit is less about changing public opinion on policy measures and more about increasing awareness of lesser-known proposals that meet with approval. By loudly advocating on behalf of the latter policies, a president can show to opponents a willingness to use the proposals as campaign issues and thus change the legislative "dynamic."

While the subject of student loan interest rates had previously been "reserved for the deep weeds of Congressional committees," as The New York Times put it, a test of the issue in the spring of 2012 by the United Technologies/National Journal Congressional Connection Poll found popular support for the Obama administration's proposal.

Canes-Wrone was careful to emphasize the limits of her findings. "We do not argue that a president can achieve any policy goal by appealing to the public about it," she wrote.

Sides agrees. "It's really about the way in which the president's behavior changes the perceptions of other political leaders," he told HuffPost via email.

To what extent might this formula apply in the future? That is a more difficult question, but recent polling has shown significant bipartisan support for more extensive background checks and database tracking of gun sales and for Obama's position on raising the debt ceiling.

All of public opinion on any issue cannot be boiled down to a single survey measure, and some political observers argue that a president's embrace can polarize views on a measure with initially bipartisan support -- by mobilizing resistance among the opposition party.

But if the Obama administration follows through on the lessons it says it learned from the first term, expect to see more savvy use of the bully pulpit.