WASHINGTON -- There are a two brands of tote bags that are perennially popular with American preppies. The first is the classic L.L. Bean canvas bag with navy straps and a navy bottom. The smallest version of the bag costs $26.95.

The second is a French nylon tote with contrasting lining, made by Herve Chapelier, which retails for more than $100.

A version of each of these bags, however, can be yours today courtesy of the Obama 2012 campaign, which is selling extremely similar versions of Chapelier's and L.L. Bean's original bags: 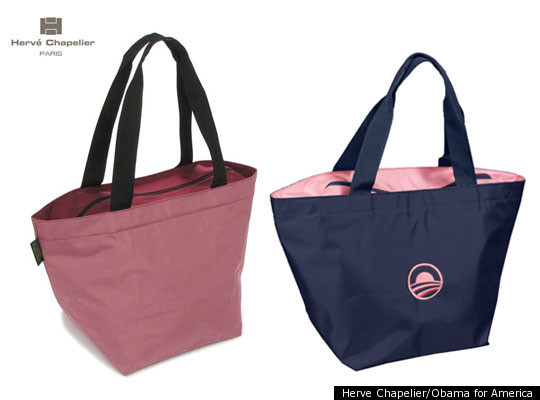 To be fair, the Obama campaign is not the first to imitate designer bags -- L.L. Bean bags have been copied ever since they first appeared more than 65 years ago. But the Chapelier bags are a slightly different story. They had their heyday in the U.S. in the mid-1990s, when they were ubiquitous on the Upper East Side of Manhattan. Their status has faded since then, but the bags are still a recognizable design.

The Obama bags may have an inch shorter strap and a campaign seal on the side, but there's no mistaking what brand they're supposed to look like.

As with any imitation status symbol, there's a healthy difference in price. The Obama nylon bag is just $25 -- a much better deal than the Chapelier bag.

A spokeswoman for the Obama campaign declined to comment on the designs' similarities.