The Obama campaign has made possibly the most unusual media buy of any presidential campaign. They have bought an entire channel on the Dish satellite network.

Channel 73-00 on Dish satellite network is now labeled 'Obama' and is looping Obama's 2 minute economic ad, Barack Obama's Plan for America, another ad, and the video that was shown at Invesco Field before Barack Obama's nomination acceptance speech. Dish Network subscribers are also reporting that when a commercial comes on any of the other channels, an option appears offering to let the user select the Obama Channel. 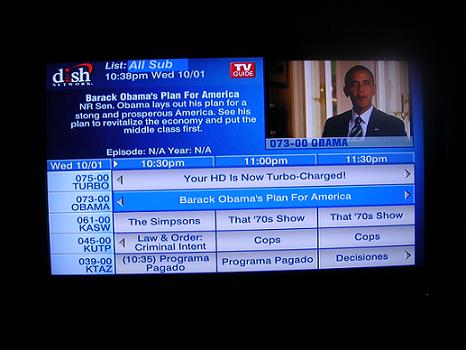 Conservative bloggers began almost immediately complaining that they do not want to pay for an Obama channel or Obama ads, but it seems this channel is a media buy -- bought and paid for in full by the Obama campaign. According to Ben Smith at Politico,

on a forum for Satellite TV aficionados, where one user writes that a Dish Network executive emailed to reassure the user that it "is paid advertising by the Obama campaign and is not an endorsement of Senator Obama by DISH Network" and will broadcast through November 4.

So far, no one seems to have been able to get an official statement from Dish or their former parent company EchoStar. There is no word yet what other plans the campaign has for this channel, and there is also no word whether the Obama campaign plans a similar media buy with other satellite or cable networks.