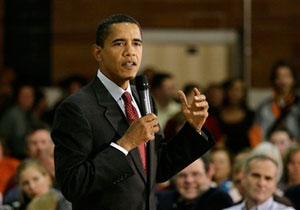 Senator Barack Obama's campaign has been struggling with its decision to hold a gospel tour in South Carolina with an anti-homosexual pastor, Donnie McClurkin.

After much criticism from gay rights groups and others, they tried inviting an openly gay minister to appear before McClurkin. But that didn't work - the Human Rights Campaign's Joe Solomonese expressed more disappointment in having the pastor on the stage and only said he hoped Obama "will move forward and facilitate face to face meetings with religious leaders, like Rev. McClurkin, and the GLBT community to confront the issue of homophobia."

Now the senator's campaign is trying to show that he's doing just that. An open letter signed by 16 LGBT and black religious leaders says that Obama is reaching out to bring blacks and homosexuals together. But Obama makes clear that even if he disagrees with African-Americans who are anti-gay, he still wants their votes.

"We believe that Barack Obama is constructing a tent big enough for LGBT Americans who know that their sexual orientation is an innate and treasured part of their being, and for African American ministers and citizens who believe that their religion prevents them from fully embracing their gay brothers and sisters," the letter states. "And if we are to confront our shared challenges we have to join together, build on common ground, and engage in a civil dialogue even when we disagree."

Update: AmericaBlog's John Aravosis, who has been driving this story, reacts to the letter here.

The full letter with its signatories can be read after the jump.

To Whom It May Concern:

As representatives of Barack Obama supporters from the African American religious community and the gay community, we are issuing a statement together for the first time. Our letter addresses the recent issue of Pastor Donnie McClurkin singing at Senator Obama's "Embrace the Change" concert series. In the midst of division, we hope and believe that this is a moment to bring together communities that have been divided for far too long.

A few things are clear.


First, Pastor McClurkin believes and has stated things about sexual orientation that are deeply hurtful and offensive to many Americans, most especially to gay Americans. This cannot and should not be denied.


At the same time, a great many African Americans share Pastor McClurkin's beliefs. This also cannot be ignored.


Finally, we believe that the only way for these two sides to find common ground is to do so together.


Not at arms length. Not in a war of words with press and pundits. Only together.


It is clear that Barack Obama is the only candidate who has made bringing these two often disparate groups together a goal. In gatherings of LGBT Americans and African Americans of faith, Obama has stated that all individuals should be afforded full civil rights regardless of their sexual orientation, and that homophobia must be eradicated in every corner of our nation. If we are to end homophobia and secure full civil rights for gay Americans, then we need an advocate within the Black community like Barack Obama.


At the same time, while Obama has said that he "strongly disagrees" with Pastor McClurkin's comments, he will not exclude from his campaign the many Americans including many in the African American community who believe the same as Pastor McClurkin.


We believe that Barack Obama is constructing a tent big enough for LGBT Americans who know that their sexual orientation is an innate and treasured part of their being, and for African American ministers and citizens who believe that their religion prevents them from fully embracing their gay brothers and sisters. And if we are to confront our shared challenges we have to join together, build on common ground, and engage in a civil dialogue even when we disagree.


We also ask Senator Obama's critics to consider the alternatives. Would we prefer a candidate who ignores the realities in the African American community and cuts off millions of Blacks who believe things offensive to many Americans? Or a panderer who tells African Americans what they want to hear, at the expense of our gay brothers and sisters? Or would we rather stand with Barack Obama, who speaks truth in love to both sides, pulling no punches but foreclosing no opportunities to engage?


That's the kind of President we need, and we are proud to support him.