MIAMI, April 12 (Reuters) - Barack Obama's historic talks with Cuban President Raul Castro on Saturday were the culmination of a long quest by the U.S. president that included meetings with moderate Cuban-Americans frustrated with the hardliners in their own community who refused to engage Havana.

The Obama-Castro meeting in Panama followed a breakthrough agreement by the two men last December to work toward normalizing relations, including seeking to restore diplomatic ties that Washington broke off in 1961.

A shift in attitudes in the Cuban-American community, most much of which is based in Miami, helped smooth the way to Obama's change in policy, with a younger generation far more amenable to contact with the communist-ruled island.

To be sure, hardline exiles still oppose closer ties with Havana. While there were no public protests over the meeting between the two presidents, there was grumbling on local radio and on social media.

Likely Republican 2016 presidential candidate and Miami resident, Jeb Bush, who is close to conservative Cuban exiles, summed up the negative feelings of hardliners in a tweet: "Why legitimize a cruel dictator of a repressive regime?"

A SMOKE BREAK SPARKS AN INTEREST

Obama has been taking the temperature of the Cuban-American community for years.

His first practical lesson took place over a smoke break outside a fund-raiser at the Kaleidoscope Club in Chicago in 2004 when he was running for the U.S. Senate.

"I told him not to listen to the crazy right-wing in Miami ... that my kids' generation thought differently," recalled Arriola, a prominent Cuban-American politician.

Arriola, invited Obama to Miami that fall for a fund-raiser that netted his Illinois Senate campaign $50,000.

"We brought him down several times after that. He would have breakfast with us and we would pick up people to introduce to him," Arriola said.

The chance encounter in Chicago sparked interest by Obama in the changes in the once solidly Republican Cuban-American enclave in south Florida.

The Miami fundraiser was kept quiet because Arriola, a 67-year-old former Republican, was still serving the city of Miami, and another participant, Manny Diaz, was the mayor. They were unsure how the Cuban exile community - known for taking to the streets - would react.

The encounter over a cigarette was also the beginning of a family friendship that would see two of Arriola's sons - Ricky and Eddy - join Obama's finance committee in both of his presidential runs.

That a small group of Cuban-Americans saw purpose in helping a rising Senate candidate in Chicago turned out to be something that would help shape U.S. policy.

"They identified Obama early on and saw the potential and brought him to Miami and got him immersed," said Carlos Saladrigas, one of a dozen Cuban-Americans who participated in the 2004 fund-raiser at the home of developer Jorge Perez.

Arriola's message about changes in Miami exile thinking was not just an idle boast. Polling showed a generational shift was taking place as younger Cuban-American leaders emerged who were more open to engagement with Cuba than a previous generation, who left the island in the early days after Fidel Castro's 1959 revolution.

During his first presidential campaign, and as part of a wider foreign policy vision that favored more openness to dialog, Obama advocated direct talks with Cuba, and even said he was willing to sit down with Raul Castro.

He traveled to Miami to deliver a speech laying out a plan to undo restrictions on remittances and travel to the island for Cuban-American families, while keeping the long-standing trade embargo in place.

In his re-election in 2012, Obama won almost 50 per cent of south Florida's Cuban-American vote, almost double what Democrats had been used to getting.

The White House also reached out to other, younger voices in the Cuban-American community, including Felice Gorordo, co-founder of Roots of Hope, a non-partisan group of young Cuban-American activists.

How far could the administration go without sparking rioting in Miami, one former top Obama adviser for Latin America policy, Dan Restrepo, asked Gorordo during a 2012 meeting to discuss reforming Cuba policy.

"I said: 'Shaking hands (with Castro).' That's something that's hard to swallow in Miami. Anything up to that is tolerable," Gorordo told Reuters.

When an unexpected handshake between Obama and Castro became the most talked-about VIP moment at Nelson Mandela's memorial service in December 2013, Obama's aides took note of the muted reaction from Cuban-Americans.

By then, secret talks with Cuba were already under way, aimed at releasing a jailed U.S. contractor in Cuba, Alan Gross, while also restoring diplomatic relations.

Obama appears to have accurately gauged the mood in Miami. 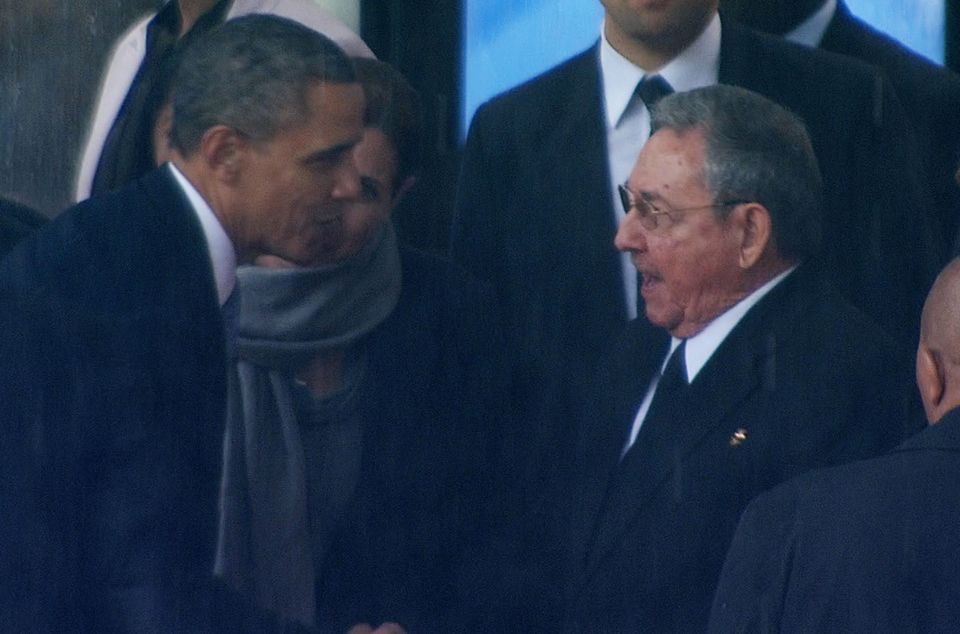