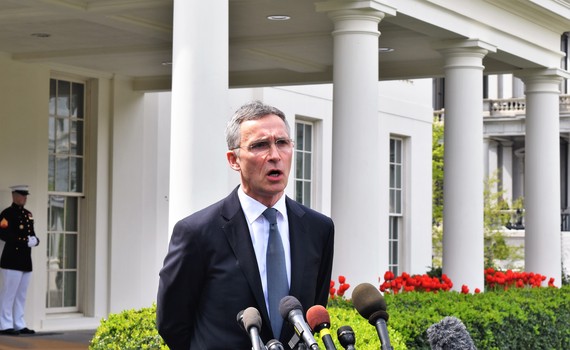 WASHINGTON, DC (Herald de Paris) -- The Secretary General of NATO, Secretary General Jens Stoltenberg, met with President Obama at the White House today. This follows several weeks in which GOP nominee front-runner, businessman, and entertainer Donald Trump has been calling NATO, "Weak, obsolete," and that he, "Doesn't mind if it breaks up." Mr. Trump's comments had little to no impact on the strength of the meeting between Obama and Stoltenberg.

The President said, "We are marking the 67th anniversary of the NATO alliance, and NATO continues to be the linchpin, the cornerstone of our collective defense and U.S. security policy."

General Stoltenberg, speaking directly to reporters at the White House said, "Hundreds of countries have served alongside Americans overseas. It's an important alliance."

The meeting marked the tragedy that had taken place in Brussels. Mr. Obama said it reinforced, "The importance of us staying focused on ISIL and countering the terrorism that has seeped up into Europe and around the world. " NATO is training and assisting process for troops in Iraq, in Jordan, in many of the areas in the region.

The President made the point that NATO has been an extraordinary partner in Afghanistan. "The coalition there continues to focus on assisting the government and the Afghan national security forces, building up capacity, pushing back against the Taliban, and helping Afghans to provide security for their own country and, hopefully, being able to arrive at some sort of political settlement that would end decades of conflict and violence there. And we are grateful for the sacrifices that NATO countries have made -- their men and women fought alongside U.S. troops. They have fought together and they have died together. " Mr. Obama believes that, "NATO is as important as ever."

Mr. Obama cited General Stoltenberg's personal commitment and personal leadership, as being a part of that. "Terrorism affects us all, from Brussels to San Bernardino, and all NATO allies contribute to the US-led efforts to degrade and destroy ISIL." -