I felt relieved when I heard Obama's victory speech this morning, and I particularly resonated with him when he spoke about the future of America's children.

"We want our children to live in an America that isn't burdened by debt, that isn't weakened by inequality, that isn't threatened by the destructive power of a warming planet," said Obama during his speech. Crowds burst into applause, while probably millions of other citizens of the world heard his vision.

My relief came with the realisation that Barack Obama shares our vision. When President Obama was elected four years ago, his challenge was to stop the U.S. from going into financial free fall. His challenge is even greater now -- he needs to play a more assertive role internationally on the issue of climate change and stop us all from climate free fall. 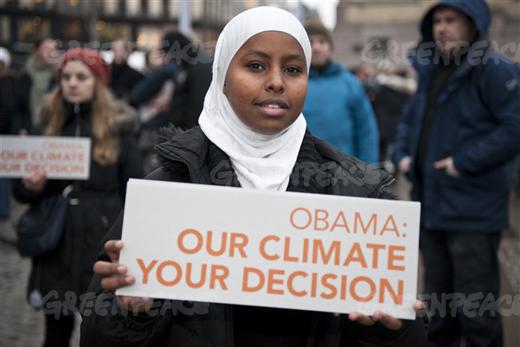 The reality is that President Obama's first four years did not deliver enough on environmental issues generally and on climate change specifically. We are cautiously hopeful that in his second term he will use more of his political capital to advance the climate change agenda at home, but also globally.

But we also give notice that if we will see more foot dragging on the part of his administration, we will intensify peaceful civil disobedience to bring more urgency to President Obama, as well as to other leaders.

Obama has nothing to lose in his second term. Rather than put his faith in a gridlocked Congress, he should look out to the people who applauded when he spoke out about climate change. At this particular historical moment, he can generate a popular response to the climate crisis that will make change possible.

President Obama should set out an agenda and be specific about how he is going to move the US to reducing its emissions, increase investment in renewable energy and actually generate tens of thousands of jobs for Americans at home; but he should also have a different approach to the role that the U.S. has globally on the issue of climate change.

We hope that the Obama administration will take a different posture at global climate change negotiations and become an agent of change, instead of remaining an obstructionist. That would be a real relief.