WASHINGTON -- Every one of the dozens of corporate tax loopholes and subsidies that President Barack Obama announced this week he'd like to expunge has something in common: Somebody fought really hard to get it passed into law.

So which industries have done the best job of fighting for loopholes? And which, therefore, would have the most to lose if the slate were wiped clean?

In return for nixing all those loopholes, Obama's plan -- which, it should be noted, was a political statement rather than a viable legislative proposal -- would lower the top corporate tax rate from 35 to 28 percent.

That would translate into a big tax cut for those corporations currently paying an effective rate of more than 28 percent, after all those deductions and credits are factored in. But it would be a big increase for those paying closer to zero -- or less.

According to a recent report from Citizens for Tax Justice and the Institute on Taxation and Economic Policy, effective tax rates vary widely within industry as well as by industry.

But after examining 280 major corporations, the report's authors found that industrial machinery companies (led by notorious tax avoider General Electric) enjoyed the lowest effective tax rate between 2008 and 2010, actually paying a negative rate of minus 13.5 percent of their profits in federal income taxes. 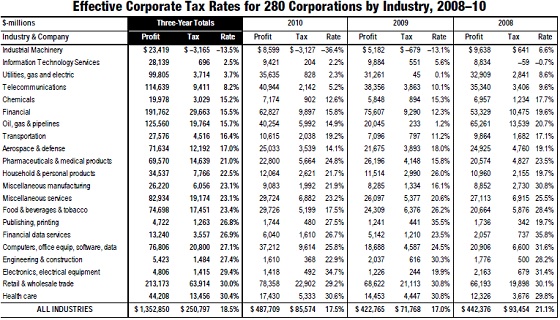 Source: Citizens for Tax Justice and the Institute on Taxation and Economic Policy report. For the effective tax rates on individual corporations, see the charts starting on page 25.

And while there's not a direct correlation between lobbying expenditures and tax avoidance during that period -- some industries, after all, had even more important things for which to lobby than tax breaks -- there is an undeniable relationship: 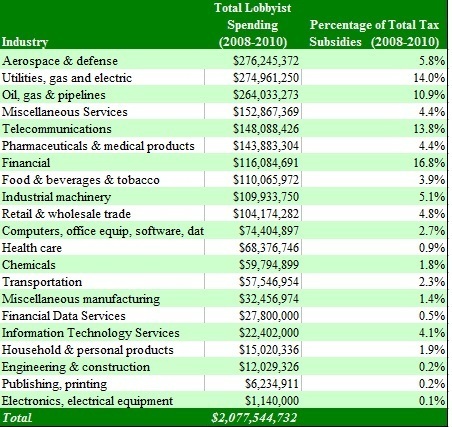