In his comments at the National Prayer Breakfast on Thursday, President Obama condemned violence in the name of religion and pointed to religious groups other than the Islamic State that have perpetrated acts of terror in human history.

"Lest we get on our high horse and think this is unique to some other place," the president said, "remember that during the Crusades and the Inquisition, people committed terrible deeds in the name of Christ. In our home country, slavery and Jim Crow all too often was justified in the name of Christ.”

The president criticized those who resort to “twisting and distorting” religion, noting incidents of sectarian war and violence in Syria, Nigeria, the Central African Republic, as well as "a rising tide of anti-Semitism and hate crimes in Europe." He also mentioned his and the First Lady's trip to India in January, saying that country has experienced "acts of intolerance" in recent years that would have shocked Mahatma Gandhi.

"In today's world, when hate groups have their own Twitter accounts and bigotry can fester in hidden places in cyberspace, it can be even harder to counteract such intolerance," Obama said. "But God compels us to try."

The president's comments angered some who felt that comparing the atrocities of the Islamic State to other acts of violence was out of line. The Catholic League's Bill Donohue called it "an attempt to deflect guilt from Muslim madmen," and argued that Christian crusaders were merely defending themselves against hostile Muslim neighbors.

Obama also spoke of Saeed Abedini, a pastor who has been detained in Iran since 2012. In January the president met with Abedini's wife and called the pastor's release a "top priority." At the Prayer Breakfast the president read from a letter Abedini sent him following that meeting in which the pastor called himself a "prisoner for Christ."

"We’re going to keep up this work," Obama said, "for Pastor Abedini and all those around the world who are unjustly held or persecuted because of their faith."

Evangelical preacher Russell Moore tweeted at the president following the event to thank him for his remarks.

Thank you @BarackObama for highlighting the plight of @NaghmehAbedini and Saeed in your National Prayer Breakfast address. 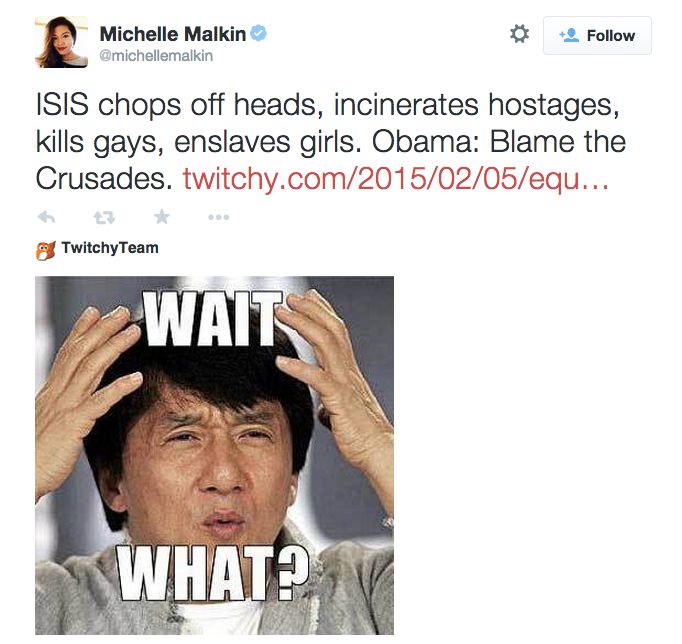